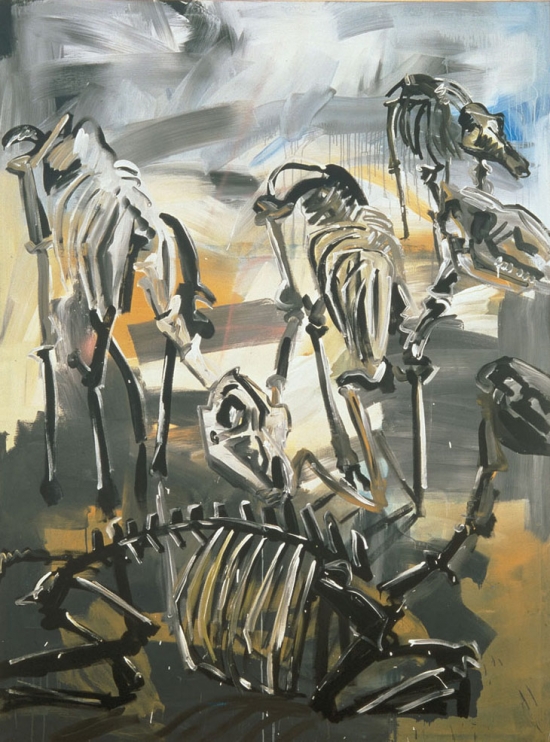 The Saatchi Gallery’s exhibition ‘The Triumph of Painting’ confronted the challenges painters face in a hyper-realistic age that is directed by photographic image. The exhibition aimed to revive the value of painting after a decade saturated with the 3D installations of the Young British Art movement. Saatchi, once a champion of these rebellious YBA’s, sold a large portion of his collection in preparation for the exhibition, stating that ‘over the last 10 years, only five of the 40 Turner Prize artists have been pure painters, [and] deemed it time for a painting survey that looked at established and upcoming painters’.

This symbolic separation between YBA artists Damien Hirst and Tracey Emin with their patron, seemed to be an attempt at galvanizing a more aesthetic approach to contemporary art and reintroducing painting to today’s society. The exhibition itself was divided into an epic formula of ‘parts,’ reflecting a classical subdivision of grand theatre and Homeric format. This arrangement showcased the magnitude and constant presence of painting within art history.

However, amidst the paintings of established painters such as Dirk Skreber and Albert Oehlen, it was Richard Wilson’s 20:50 oil tank installation that invoked the most enthusiasm from visitors; though not officially part of the exhibition. The oil-filled room reflected the walls, windows and ceilings like an interior lake; a true reflection of architectural features. It appeared easier to connect with Wilson’s piece as there was no urgency in its interpretation, only limitless boundaries.

This unexpected reaction exposed the limits of painting and the increasing popularity of installation art for modern viewers in London at least. Gallery visitors at Saatchi’s exhibition remarked that the paintings were unintelligible without the lengthy explanations that justified the importance of the works, revealing the inability of abstract forms to exist without the crutch of literature. The paintings in the exhibition were thus unable to reach out to an audience spoilt by photo-realism. Narrative in the paintings were lost, and the abstract compositions with their wordy placards served to underline this fact.

To assess why installation is becoming more popular, we must look to the origins of critical theory. More than two thousand years ago, Plato, in his manifesto The Republic, insisted that a painter had no direct knowledge of what he or she reflected in a painting. Therefore, pictures could reveal and narrate nothing about life.  To illustrate his point, Plato used an example of a bed. According to Plato, a bed can exist in three forms. The bed of nature created by ‘God,’ the bed created by the craftsman that reflects the bed of nature, and the bed created by the painter, which is nothing more than an imitation. Suddenly, installation seems different and Tracey Emin’s notorious Turner Prize winning Unmade Bed, 1998, makes more sense.

Arguably, Emin contributed to a shift in art perception with her bed, although she was by no means the only artist in the last century to do so.  Featured painter Albert Oehlen admits that painting is only headed for failure, reflecting a self-consciousnesswithin that emerged with Marcel Duchamp’s 1917 latrine installation that metaphorically pissed on the traditional painting establishment.  Duchamp’s latrine invoked a massive change in art theory by altering the “value” of art, and after him, works began to be judged according to how much they questioned art’s nature. Where in the mid-twentieth century, painters such as Picasso and De Chirico were held up as great artists; last year, Duchamp was named as the greatest artist of the twentieth century.

This shift explains why contemporary audiences seem to interpret installation more readily than painting. Oehlen acknowledges this ‘death’ and describes his canvases as ‘manic zombies’ that stand to be judged by a changing culture that does not always have the patience to judge them.  Maybe the apparent obscurity of modern painting is therefore not so much a criticism on the painter than it is a reflection of the viewer. For example, Oehlen’s paintings can be admired as pure melancholic aesthetic. Franz Ackermann’s dynamic experimentations of psychedelic architectural deconstructions are comprehensible without accompanying literature.  Perhaps it is not the artist or the viewer who is killing painting.  Could it be the explanatory placard?

Do we really need to read about Kai Althoff’s flamboyant and voyeuristic images of soldiers to understand that they evoke a dark and current significance in today’s political climate whilst simultaneously alluding to twentieth century history? Is it necessary to be quided to the conclusion that these paintings are a delicate investigation into the male psyche, the nature of war and its dominance in every generation?  Perhaps we do not.  Perhaps it would simply take more time and in fact, more historical knowledge to understand the artist’s references.  Is that such a bad thing?

Despite mixed reviews, the exhibition was extremely successful in its attempt to confront the continuing dilemma of painting in the digital world and a brave effort at re-introducing fine art into contemporary London. However, too many justifications rendered the works void as an installation stood silently coherent.

A large number of fine art students have recently commented that painting just doesn’t seem to be enough anymore and are exploring new ways of breathing life into their surfaces. As the art world expands and develops, painters face great challenges in finding ways to reflect and express. However, we must remember that great challenges always evoke great work. Mark Dion’s exhibition of scientific and environmental installations, Microcosmographia and Nigel Cooke’s mesmerizing painting exhibition, A Picture of Everything, at the South London Gallery one year ago, gave a clear picture of things to come. The future looks good.