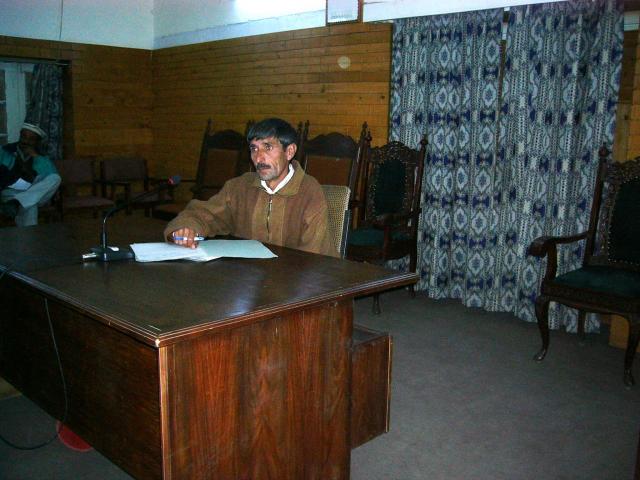 CHITRAL:  A meeting of Zilla Council Chitral held here under the chair of Convener Sultan Shah. This was one point agenda to ascertain criteria of distribution of fund in head of forest royalty and establishment of Joint Forest Management Committee (JFMC). Divisional Forest Officer (DFO) Forest briefed the house regarding JFMC criteria. Members of the house criticized that forest department not implementing JFMC rules 2004 and not implemented in its full and real shape. The house also expressed their concern over that either the fund is distributing among the real royalty holders or it is embezzling with conspiracy of timber mafia. Some of Nazimeen pointed out that forest department have established JFMC at each village but they have ignored totally other non-government organizations like Village Committee, Citizen Community Board, Women organizations etc. Qayum Baig Nazim union Council Khoth asked from DFO to explain that how many timber have been cut and why some forest have been marked twice. As well as near and dears one were mentioned in JFMC.

Syed Imtiaz Hussain Jan Advocate Nazim Union Council Ashriat presented a resolution. Which did the house unanimously passed. Through a unanimous resolution they demanded to detail an inquiry committee under the chair of Imtiaz Hussain Jan to probe into establishment and framing of JFMC as the local community are not aware about the JFMC. The house also passed the resolution that verification must be conducted of JFMC working already in the district. Forest department could not register any JFMC until it is verified by the concern UC Nazim. Until submitting the report of forest inquiry committee all JFMC may be debugged and stopped from further work. As well as forest department was banned until this report from any type of documentations, marking of forest for cutting purposes, preparing of work plan and awarding any tender. The forest inquiry committee comprising over Imtiaz Jan Chairman as well as Qayum Baig Nazim UC Torkho, Muhammad Wazir Nazim UC Yarkhun, Sohbrab Khan Nazim UC Sheshikoh and Rehmat Elahi Nazim UC Ayun are members of the committee. The session was provoked until Friday.