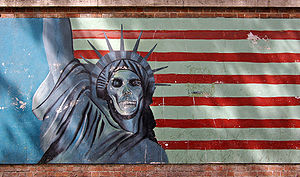 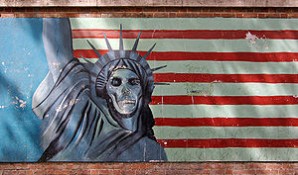 fter the Iranian hostage crisis (1979–1981), the walls of the former U.S. embassy in Tehran were covered in mostly anti-American murals.

Andre Le Gallo is a legend in the spy world.

He is a former operative for the Central Intelligence Agency Clandestine Service – a veteran of several coups, a war and a revolution.

During a distinguished thirty-year career with the CIA, he served in the Middle East, South East Asia, North and West Africa, and Eastern and Western Europe.

He also saved countless lives…etc.  During the Gulf War in the 1990′s he helped choose high value targets for Tomahawk cruise missile strikes in Iraq…

Le Gallo was also a “Chief of Station” in four countries (that we know of), managing counterintelligence, covert action and specialoperations.

He was also the National Intelligence Officer for Counter-terrorism.

After 911, Le Gallo was asked to participate as a board member for a think tank under the Office of the Director of National Intelligence, spoke on national security issues at Los Alamos and Lawrence Livermore National Labs, Microsoft and Oracle, and multiple universities including Harvard Law School, Rice, UC Berkeley, and Stanford.

LeGallo has been published in the “Intelligence and Counterintelligence Journal”, “The Intelligencer”, “The Forensic Examiner”, in “Studies in Intelligence” and by “United Press International”. His first novel, “The Caliphate”, was published in 2010 and his second, “Satan’s Spy”, in 2012.

We had an opportunity talk with Andre Le Gallo to discuss his book: Satan’s Spy – here is what he had to say:

“Write about what you know” goes an old saw so the background tapestry for Satan’s Spy is drawn from personal experience.   Intelligence operations do not exist in a vacuum and the story provides a glimpse into some of these external factors: the friction between the CIA and the Department of State, the professional and competitive culture in the world of clandestine operations, and the now long running Iranian hostility toward the United States.

We know that politics no longer stops at the waters edge from the partisan wars over foreign policy that the media serves up, and participates in, daily.

For Iranian atmospherics I drew on one of my most memorable tours with the CIA, which took my family and me to Tehran at the outset of the 1978–79 Revolution. The roadblock scene is based on an actual event.

Since our house was near a mosque where the rioters would assemble after the daily curfew, each night was “Ground Hog Day.”  Punctuated by the full-throated “Allahu Akbars” of our neighbors on their rooftops, crowd noises usually peaked around 11 PM overpowered an hour later by the clanking of Centurion tanks followed by shots and silence until the next day.

The following morning our Iranian neighbors’ children would knock on our door to ask our children to come out and play.  One day I found a note under the door, which threatened to kill my family if we were not all out of Iran by 1 December.

One day we may learn that the CIA is currently running high risk operations in Iran that are similar to Steve and Kella’s adventure.

Filed under: Lifestyle, Literature
Share Tweet Pin G Plus Email
previous article: Russia’s action in Ukraine “shattered the myth” of an end of insecurity in Europe, said Hagel
next article: “Nuclear weapons are forbidden in Islam and people are to avoid that”, says Ayatollah Khamenei