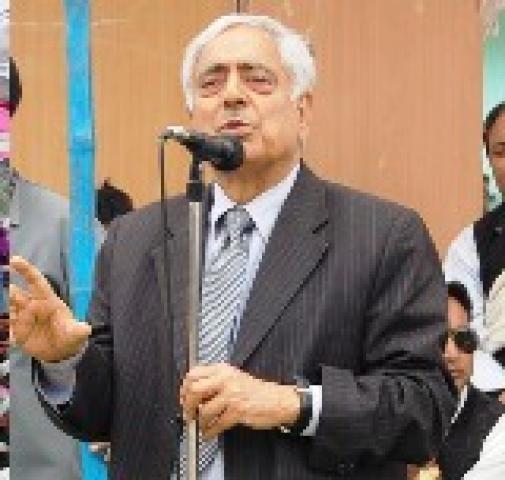 Srinagar, September 9 (Vijay Kumar)- Stressing the need for building a strong RTI movement in the state,Former Indian home minister and Peoples Democratic Party patron Mufti Mohammad Sayeed said its objective should be to ensure better  governance and not disruption of development process. He said the youth wing of the party could fill the current void by taking up causes that lead to judicious use of funds and relief to people.

Mufti was delivering valedictory address at a workshop on right to information here today organised by the youth wing of PDP.He said J&K had suffered an information black out for decades as a result of disturbed conditions and it was time that the common man had access to government functioning so that it became a participatory process.He said elections are only one part of democratic process which should ultimately aim at empowerment of society in defining and shaping their destiny.

The PDP patron said institutional functioning could drive home the realities and help project issues more effectively if properly used.Citing the example of the just concluded session of state legislature he said by properly flagging the issues that touched common man in the state like the loot of land and water had emerged as major concerns for everybody which had already triggered a constructive debate. He said public awareness was of utmost importance if we want to have our rights restored to us through a struggle within democratic norms.
While urging the youth to utilize the Right to Information  to help the weaker and vulnerable sections of society in ensuring a fair deal from government schemes and plans Mufti cautioned them against creating fear among the officials. He said the law on the subject should be used with discretion so that even the officials can find safeguard under it against political pressure that could refuse wrong and illegal orders citing the Act. Mufti said the RTI could be invoked with great impact on the lives of the poor and the downtrodden in all spheres of governance but it could be particularly effective in rural development, social welfare and public distribution.

Referring to the acute unemployment problem in the state Mufti said the hopelessness and frustration of youth poses biggest challenge to the society. While it was necessary to employ the resources of the state for creating job avenues the fairness of procedures could not be allowed to be compromised. He said after 2002 PDP led government had set new standards of fairness in recruitment and the party will have to continue its role as a watchdog of people’s interests as working within norms was never a distinction of the National Conference. He urges the youth workers to guide the unemployed to register in employment exchanges to qualify for any government assistance in future.
Expressing his disapproval of the high rate of fees charged under the revised RTI Act, Mufti said PDP had raised this issue forcefully in the Assembly. He urged the government to immediately reduce the rates of fee under the act so that any person could access information under the Act.