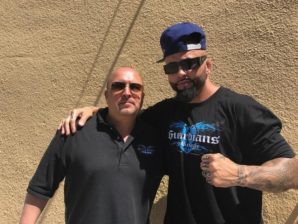 While Rene “Level” Martinez may have had some great fights as a MMA fighter, he’s about to take on a big one in the Miami-Dade area. The former MMA fighter has joined the Guardians of Rescue animal rescue group to help fight animal abuse in the Miami-Dade area. The former gang leader grew up on the streets in the area and has made it his mission to help fight for those animals that are in need of help.

“We are really excited that Level is going to be bringing his street smarts to the animal abuse world. Armed with his strong convictions and love for animals, he is a champion for the voiceless,” stated Robert Misseri, founder and president of Guardians of Rescue, an animal rescue organization. “Having him on our team is a huge asset and one that we know will help benefit the many struggling and abused animals in the Miami-Dade area. This is going to be a good thing for the animals in need in South Florida.”

According to the University of Florida, there are nearly half a million cats and dogs admitted to shelters each year in the state of Florida, with more than half of all of those intakes coming from free-roaming/strays. In the Miami-Dade area, there are many abandoned, stray, and homeless animals in shelters and that are strays, wandering neighborhoods, struggling to survive, with many people believing that their owners have simply dumped them on the streets to fend for themselves.

Throughout the county, it is believed that many cultural traditions involving animal abuse, such as dog fighting, have been allowed to continue, despite it not being acceptable around the country and there being laws, including federal, against it. . The group seeks to bring an end to that, as well as to see to it that laws are enforced and changes are made that will turn the current perception of animals as being non-feeling throw-away creatures into one that will help people appreciate them as sentient beings.

Level is joining forces with the animal rescue group to help address the many problems with animal abuse that take place there, including abused and abandoned pets. Born in Miami, he found himself homeless on the streets at 16, and he went on to cofound a gang called the Latin Syndicate. In 2009, he made his debut as a professional MMA fighter, leaving behind the gang life. His mother also discovered God and got him into the church, where a couple of years ago he was baptized and dedicated his life to Jesus Christ. Since then, his mission has been to help make the county a better place. Animals that can’t speak up for themselves have a special place in his heart, inspiring him to focus on helping to end animal abuse.

“These are the streets I grew up on and love. I love animals and want to help knock out the abuse that leads them to being harmed and abandoned,” says Level. “From being abandoned and abused to the dog fighting that destroys them, these are things that need to come to an end, and I’m happy to work with Guardians of Rescue to help make it happen.”

The Guardians of Rescue are working in Florida to help end the rampant abandonment of dogs, help support local rescues in their battle to combat animal cruelty that is widely known and to help the many severe neglect and abuse cases that are seen county-wide. There are a large number of dogs being abandoned and left to suffer by starvation in the Redlands and Homestead areas of South Dade. They are also working to tackle the prolific dogfighting and cockfighting that continues in the county and to educate the public.

The community can assist GOR by watching out for animals in need and contacting the organization when they see those in distress. Guardians of Rescue provides assistance to animals out on the streets, working with rescues in Miami-Dade county, helping to rescue them, provide medical care, food, and shelter. They are also instrumental in helping military members with their pets. To learn more, get involved, or to make a donation to support the Guardians of Rescue, log onto www.guardiansofrescue.org.

Filed under: Animal Rights, News
Share Tweet Pin G Plus Email
previous article: Uncovering the Truth behind Online Reputation Management
next article: How To Get Advice In Your Career Path