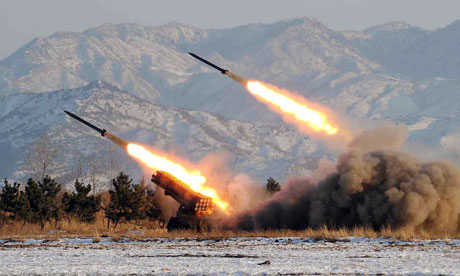 North Korea has the capability of striking targets along the west coast of the United States (and Guam).

Here is exactly what Bush had to say:

West Coast or Pacific Coast are terms for the westernmost coastal states of the United States, usually California, Oregon, and Washington.

The west coast of the United States includes the following major cities:

As of the 2010 Census, the estimated population of the Census Bureau’s Pacific Region was approximately 47.8 million (56.9 million if Nevada and Arizona are included) – about 15.3% (18.2% with Nevada and Arizona) of US population (source: http://factfinder2.census.gov/faces/nav/jsf/pages/index.xhtml).

Speculation is that the former president could have only attained such information from classified intelligence sources within the CIA (Central Intelligence Agency) https://www.cia.gov/index.html.

This is the first time that information has been revealed by a “credible source” to the American public outside North Korea itself (source: http://thetruthisnow.com/headlines/north-korea-says-its-nuclear-weapons-can-strike-us-mainland/).

In response the Obama administration has deployed 14 additional ground-based missile interceptors on the West Coast.

Adding to the 30 interceptors already in place in California and Alaska will beef up the ability to shoot down incoming missiles in space.

The defense system has existed since at least 2004 since the Bush Presidency. Interestingly North Korea (officially the Democratic People’s Republic of Korea or DPRK) only officially declared in 2009 that it had developed a nuclear weapon, and possessed a small stockpile of relatively simple nuclear weapons.

It should also be noted that North Korea may also have a chemical and/or biological weapons capability http://www.defense.gov/pubs/ReporttoCongressonMilitaryandSecurityDevelopmentsInvolvingtheDPRK.pdf