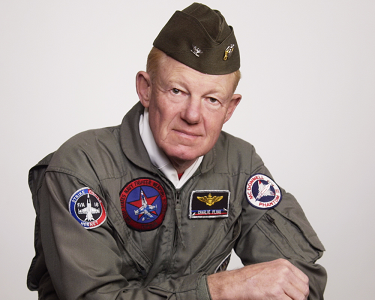 Boulder Crest Retreat for Military Veteran Wellness announces that Captain Charlie Plumb, U.S. Navy (retired), joins their honorary advisory board. Captain Plumb graduated from the U.S. Naval Academy in Annapolis, Maryland and went on to fly the F-4 Phantom jet on 74 successful combat missions over Vietnam. On his 75th mission, with only five days before he was to return home, Captain Plumb was shot down, captured, tortured, and imprisoned in an 8 x 8 foot cell, where he spent the next 2,103 days as a prisoner of war.

“I am honored by the involvement of our Honorary Advisory Board and the addition of Captain Plumb,” says Ken Falke, chairman and founder of Boulder Crest Retreat.  “Captain Plumb is the epitome of a warrior that exhibits posttraumatic growth and will be very helpful to our team as we continue to innovate and refine our Warrior PATHH program(s). I cannot think of better experience to be able to draw from and it makes me very happy to add Captain Plumb to our very prestigious honorary board.”

During his nearly six years of captivity, Plumb distinguished himself among his fellow prisoners as a professional in underground communications, and served for two of those years as the chaplain in his camp. His military honors include a Silver Star, Legion of Merit, Bronze Star, two Purple Hearts, and the P.O.W. Medal.

“Approximately 30 percent of both Vietnam and today’s generation of veterans have PTSD. About four percent of prisoners of war exhibit PTSD symptoms. My reflections on these statistics are that the leadership in our POW camps allowed for deep self-reflection and growth upon our returns home,” added Plumb. “Maybe it is leadership we are missing in PTSD care versus therapy.  The posttraumatic growth approach at Boulder Crest Retreat is exactly the kind of innovation we need to help heal our combat veterans, and I look forward to adding value to the great work done by Ken and his team.”