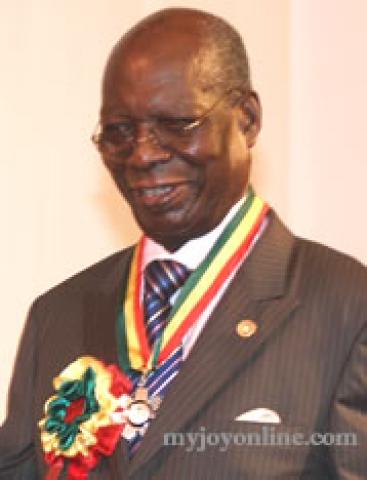 The former Speaker of the Ghanaian parliarment has died ,few days to his 77th birthday on August 11, 2008 family sources have said.

Mr. Peter Ala Adjetey passed away tuesday morning after a short illness.

The affable politician, whose baritone voice while he presided over Parliament and his impartial approach to issues so endeared him to both sides of the august House, was said to have been rushed to the Korle Bu Teaching Hospital for attention on Friday.

A week earlier, on July 5, he was decorated by President J.A. Kufuor at the National Awards ceremony on July 3 with the Order of the Star-Member, as a Lawyer/Politician and Former Speaker of Parliament for his Public Service and Development of the Legislature.

Minutes after news of his death spread, many ghananians poured in their tribute on radio to the man who was until his death, a don of Ghanaian politics and law.

Speaking on JOY FM in Accra Ghana, Opposition NDC Member of Parliarment for Lawra Nabdam and Shadow Finance and Economic Minister, Moses Asaga paid gloring tribute to him and prayed that he rests in peace.

NPP Presidential Candidate for the December Elections in 2008 Nana Addo Dankwa Akuffo Addo is also reproted to have gone to the residence of the former Speaker to console with his family.