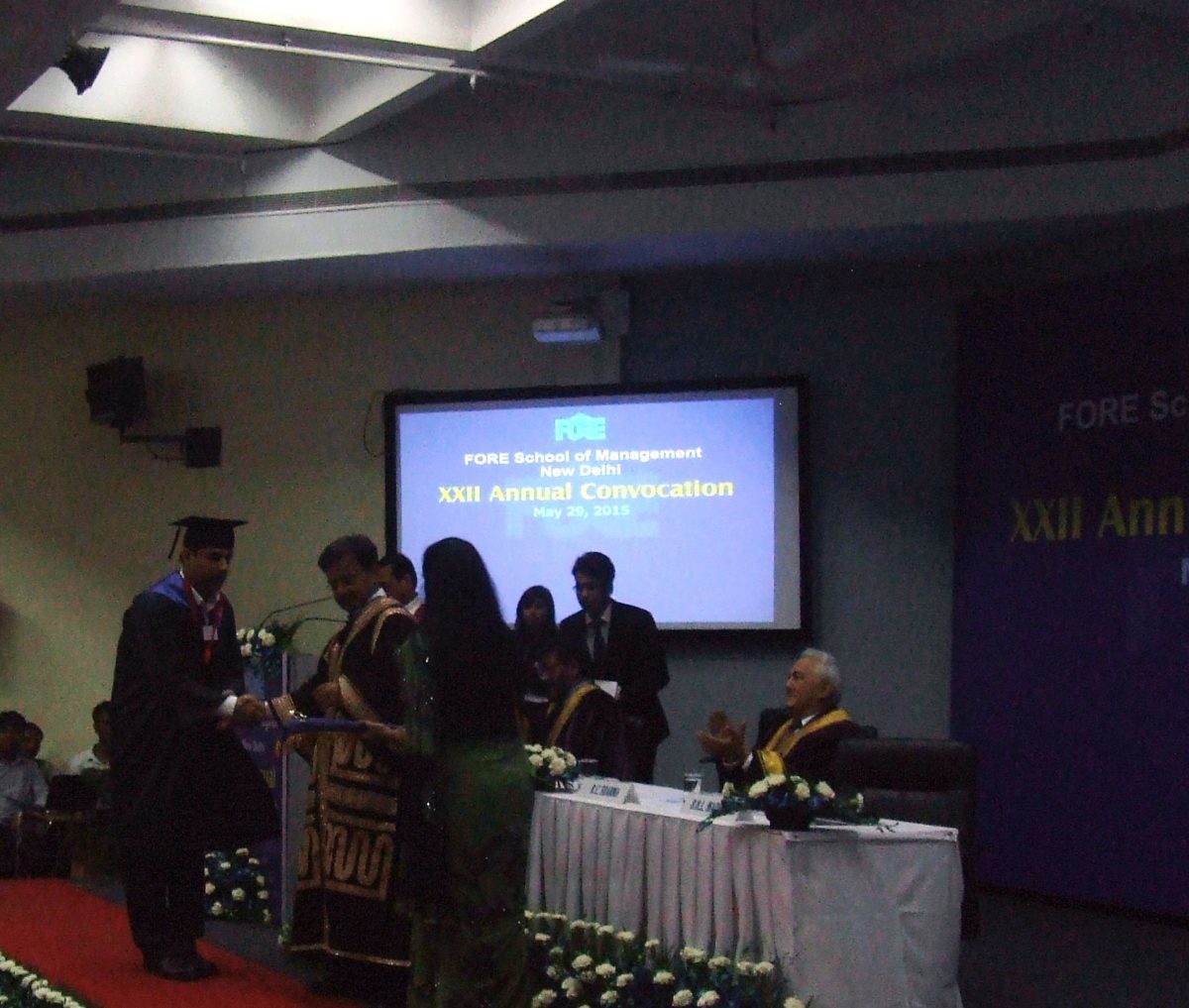 Dr. Jitendra Das, Director – FORE welcomed the Chief Guest and presented the Activity Report for the year 2014-15 highlighting the achievements and awards received by FORE during the year. He said, “Retain that very element in you that made it possible for you to get an admission at FORE as that element in you must have been a combination of many things apart from your good scores or CGPA: your cognitive abilities, zeal to work hard, your attitude towards life and off course that X-factor; an indicator of your potential leadership abilities and capabilities to cope up with turbulence in business environment.”

Chief Guest, former top cop, Mr. Abhayanand, charmed the graduating students with his humility, wittiness and words of wisdom from real life experiences. He started with, “I have not undergone a structured course and a management program like you. My experiences are mostly what life has offered me”. After graduating with physics and topping the University, he appeared for UPSC and joined the police forces. His deep desire to pursue a management course made him enroll himself with one of the top B-Schools of Jharkhand defying all challenges of working with Bihar Police force, chasing notorious criminals and demanding work-hours. But then came an abrupt end in his management studies as he decided to quit for a different reason altogether. It so happened that once he had to go to Kolkata to conduct a raid just a day before one of the scheduled examination. When he came back hurriedly after the raid and went for the exam, he was informed that the exam was preponed and conducted on the day, he was out. Highly disappointed with this, he went up to the faculty and said that he did not want to study ‘management in such mismanaged environment where a scheduled test is preponed suddenly’.

Though that was the end of his dream of pursuing formal management studies but he continued reading management books on his own and even attempted to implement Philip Kotler’s, ‘Marketing Policies for Service Sector’ in the traditional Bihar’s police force.

He recommended the students to be ‘unreasonable’ by breaking the cliché and bringing in new ideas in the areas where they can create an impact and make the world accept their point of view through power of conviction and not through the power of authority. “Problem is we are not trained to be unreasonable.  They do not teach us the ‘Whys’, they teach us the ‘Hows”. He challenged the young minds with an interesting concept of moving on from ‘analysis to syntheses’. “Instead of breaking down things and analyzing in parts, seeing the whole thing in totality is the key. We collect data and interpret results but what is important is to figure out that one thing which impinges everything. Just like E=mc2 encompasses the entirety”.

During his tenure, to deal with shortage of manpower in the police, Abhayanand came up with the idea of recruiting retired army men. Given that the ex-army men were already trained in arms and combat, there was no ramp up time needed for them. They were ready to contribute from day one. The state government adopted this idea and in few days 5000 ex-army men were recruited by the Bihar state police force. This concept soon became a role model and other states such as Orissa, Madhya Pradesh and Jharkhand started recruiting ex-army men. In fact, Princeton University, USA, included the innovative steps of Abhayanand to improve law and order in its list of case studies and posted it on its official website.

The globally acclaimed academic mentor and educationist for the under-privileged Abhayanand’s, parting advice to the students was – “Try and do things which are socially relevant and give back something to the society from which you have received so much.”

A live web cast of the event was done specially keeping in mind the friends, families of the students’ to witness the significant moment.