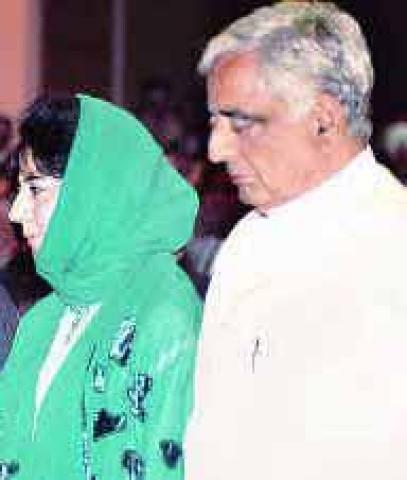 September 18 – Former Union Home Minister  and Peoples Democratic Party (PDP) Patron Mufti Mohammad Sayeed today cautioned government of against its apparent policy of drift and inaction in . In a statement issued here today he said the problem wouldn’t disappear by ignoring it or seeking quick fix solutions of fire-fighting nature.

Urging the center to revive and push forward the Kashmir resolution process with political courage and sincerity of purpose, he said it is time that we respond to the public sentiment and take concrete political measures for the resolution of the problem instead of resorting to strong-arm tactics to suppress their aspirations. "Addressing the public sentiment with open mind is a challenge and gun could not be the State’s medium of expression in the current scenario," he asserted.

Sayeed said it is unfortunate that issues like the opening of Muzafarabad road to trade which was piloted by two Prime Ministers belonging to the two opposite poles of Indian political landscape should have taken half a million people to demonstrate and scores to sacrifice lives to get back on agenda. The PDP, he said, had constantly been reminding of dangers in slowing down the process of resolution.

Sayeed said there is absolutely no reason in not talking to the people of and listening to their grievances which are being now given expression through non-violent protests. "The pre-condition most of the times laid by Government of India for working towards the resolution of the Kashmir problem was cessation of violence in the area," he said and added that not only the separatist leadership but even the people of Kashmir have, during recent mass protests, in most profound terms denounced any form of violence despite severest provocations.

"The Government of India must engage in a constructive, comprehensive, purposeful and productive dialogue process, not only with Pakistan, but with the people of Jammu & Kashmir as well, to resolve the issue," Sayeed said and added that the stabilization of political situation in Pakistan has offered another window of opportunity for the revival of the peace process and resolution of the issues, before the hawkish elements try to spoil it again.

Sayeed said marking a clear departure from the history of hatred and hostility in the region, the peace process initiated in 2003, yielded momentous dividends in the shape of the ceasefire along the borders, opening up of cross-LoC routes for passenger traffic and visits by the representatives of the civil society, media professionals, businessmen and ordinary citizens to and from the two sides of Kashmir.

"What is more important is that hope had replaced despair during that period," he said and added that the lack of follow-up  and misplaced priorities after 2005, unfortunately, pushed not only the confidence building measures under the carpet but also put the peace process on the back-burner. "And the result is there for everybody to see," he said.

Stressing that a renewed and resolute political effort has to be made to reach out to the people of Kashmir, Sayeed made it clear that democracy should not be confined only to holding of elections in the State, the civil society and the institutions of democracy must get a free play. "It is time that bold, strong and, of course, measured initiatives are taken to strengthen the people’s faith in the process of dialogue and peaceful resolution," he said and to his letter to the Prime Minister Dr Manmohan Singh on 5th March 2007, in which he had pointed out "it is very important that J&K’s relations with rest of the country should not be symbolized at the local level by the soldier and his gun alone."

Sayeed said besides speeding up across LoC confidence building process, the Government of India must move fast on the public demand for reduction of troops and revocation of the Armed Forces Special Powers Act (AFSPA) from the State to assuage the hurt public sentiment.

"AFSPA had been invoked to fight armed militancy" he said and wondered as to how this law reconciles with the changed scenario when people were holding peaceful demonstrations and their leaders stressing virtues of peaceful conduct. This law in fact has now brutalized the entire scenario in the areas where it is applicable as can be assessed from recent events in which security forces used force only selectively. The inquiries and criminal cases instituted in incidents like Pathribal and Ganderbal fell through as the perpetrators took refuge under this law. There is no place for such laws in the changed scenario, Sayeed asserted.

Expressing heartfelt sympathies with the families of all those who lost their near and dear ones during the recent protests, Sayeed said the repressive tactics has failed in the past and it is going to face the same fate in the future as well.