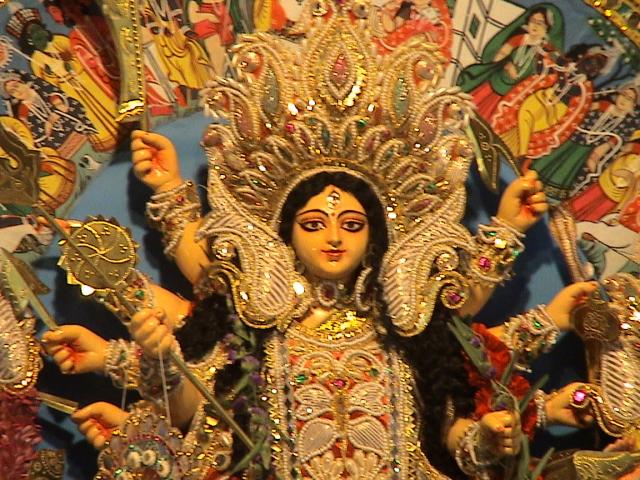 Countdown starts for Bengalies’ favourite festival Durga Puja.Four days of festival recalls the power of female Shakti (power) symbolized by the Goddess Durga who killed asura(demon) to re-establish peace and sanctity on universe again.Bengalies all over the world purchase gifts for dear ones.Durga puja is an occasion when the familiar sound of Dhak,Dhunuchi nachh,the fragrance of Shiuli (Nyctanthes arbor-tristis,Shiuli flower is the official flower of the state of West Bengal) are synomous to Durga festival.The Festival starts from sasthi,the six day after the new moon.The drum beats are an integral part of any Durgadhaki (drummer) held on the shoulder and is beaten with two sticks.The 10 handed Goddess Durga made up of clay is on top of a lion.Her hands carry different weapons in them except two which holds the spear which has been struck into the chest of Mahishasura (demon).The four children are accompanying Durga are Laxmi,the goddess of wealth,Saraswati,the Goddess of knowledge,kartik,the god of warship and Ganesha,the elephant faced god representing everything that is good.


Devotees line up from the early hours to offer flowers (anjali). After the prayers, the Prasad (sacred food) is distributed. Priests perform rituals by chanting religious verses.Bengalies prefer non-vegetarian foods in this day.he famous Autumn festival of Bengal comes to an end with the immersion of the idols of Goddess Durga in the river Ganges or nearby lakes or ponds.Visharjan (immersion) is the official end of the Durga puja (worship).During Sindur khela (Vermillion game), married women greet each other after offering prayer to the Mother God at their puja mandop (makeshift temple).It begins after priests complete the ritual to end the puja.During sindur khela they greet each other after offering prayer to the Goddess.They apply Sindur to the Goddess’s head and offer sweets and  greet each other.Immersion take place in nearby water body or river sides.After the immersion, younger ones touch the feet of elder ones to pay their respect