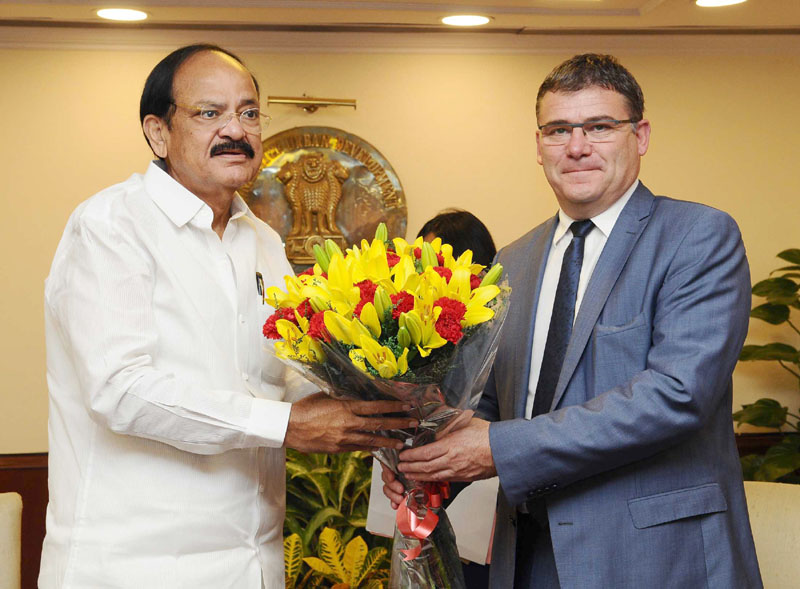 New Delhi (PIB-GR-TYP-BIN): France has appreciated the initiatives of Indian Government for addressing climate change concerns as an integral part of new urban sector missions. The new urban sector initiatives and the possible areas of cooperation between the two countries were discussed in detail at a meeting between Minister of Urban Development Mr. M.Venkaiah Naidu and the visiting French Minister of State for Industry Mr. Christophe Sirigue on Oct 25.

Mr. Venkaiah Naidu said that sustainable and climate friendly urban planning has been made the corner stone of new urban missions launched by the government over the last two years. Elaborating on this, he said that increased emphasis on reliable public transport and non-motorized transport, technology based Intelligent Transport Systems, efficient water and power management for conservation of scarce resources, focus on New and Renewable Sources of energy like solar power, green construction, development of open and green spaces, conversion of municipal solid waste into compost and energy, large scale replacement of old water pumps with energy efficient sets etc., were some of the climate friendly initiatives mandated under the new urban missions launched to enable urban renaissance.

Appreciating India’s enabling role in concluding COP-21 Agreement at Paris, Mr. Sirigue noted that these initiatives go to prove the country’s commitment to address climate change concerns. He also said that urban renaissance is the appropriate word for the Indian Government’s initiatives to recast the urban landscape.

Mr. Sirigue said that France which has already signed MoU for assisting in smart city development of Chandigarh, Nagpur and Puducherry, has the necessary expertise to assist in execution of new urban sector initiatives in India on a large scale. He informed that a French delegation would be visiting the Andhra Pradesh capital Amaravati on November 30, 2016 for exploring collaboration opportunities.