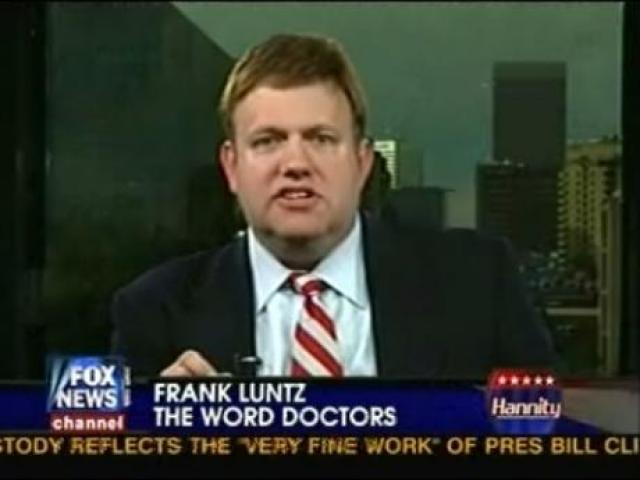 Frank Luntz is a Republican political consultant and pollster. He has most notably worked with Fox News as a frequent commentator and analyst and a Republican Party consultant. You might have remembered Luntz from his use of focus groups during the previous presidential debates. Luntz specializes in “testing language and finding words that will help his clients sell their product or turn public opinion on an issue or candidate”. In other words, Luntz is a political spin doctor. Think of Luntz when Republicans come up with a piece of legislation called “The Clear Skies Initiative” which allows polluters to self-regulate.

Last week, at the Republican Governors Association’s annual meeting, GOP leaders had a chance to talk and strategize with Luntz about how to deal with the Occupy movement. Luntz said of the movement, "I’m so scared of this anti-Wall Street effort. I’m frightened to death…They’re having an impact on what the American people think of capitalism."

Luntz went on to list 10 do’s and don’ts for Republicans when fielding questions from their constituents. The following are the first five on the list, as reported by Yahoo News, along with my commentary. Next week, I will comment on the remaining 5 do’s and don’ts on Luntz’s list.

F.L.: "I’m trying to get that word removed and we’re replacing it with either ‘economic freedom’ or ‘free market,’ "Luntz said.”The public . . . still prefers capitalism to socialism, but they think capitalism is immoral. And if we’re seen as defenders of quote, Wall Street, end quote, we’ve got a problem."

D.W.: I love this first statement by Luntz. I find the statement to be extremely revealing. It’s tempting to write a whole article just on this point. In fact, Rush Limbaugh was so upset at Luntz’s comment on capitalism, Limbaugh went on an unusual screech attacking the Republican spin doctor for even suggesting capitalism is becoming a bad word. But Luntz is right. Unregulated capitalism has been proven, time and time again, to have disastrous consequences on the economy.

The Occupy movement has made it clear, both the Republicans and the Democrats have been far too cozy with the banks and other big corporate interests. Both parites have allowed the corporate industrial complex to run amok. Luntz doesn’t want Republican’s to be overtly seen as championing the capitalist cause over the interested of the general public. However, it’s a little too late for that one.

D.W.: This is where Luntz’s evil genius comes out. Luntz wants Republicans to suggest to Americans that taxes are a bad thing. It is government taking something away from you. Taxes are therefore personally harmful and the government is acting like a bully by stealing away your money. By suggesting this, Republicans want Americans to be resentful of their government, rather than supportive.

Now I know there is a long and healthy history of Americans from both the political left and right distrusting their government. It is that distrust that often keeps the government in check. However, by framing taxes as an abuse of power, Luntz shifts the debate away from the normal and healthy distrust of the government into a position closer to a hatred for our government. This is not a healthy understanding of what taxes do. Without taxes we would not have a police force to protect us, fire department, roads, public schools, or a military. Taxes not only take from us, they also give us the things that make our lives better. Most American believe paying their taxes is duty to "God and county."

In addition, I would not call someone like Paris Hilton a “hardworking American.” Nor would I call day traders that spend their morning hours gambling on the stock market “hardworking American”. Many of the ultra rich are neither working hard nor are they really adding jobs to our economy. Yet, thanks to the GOP, they pay a smaller percentage of the income in taxes than many in the middle class. This is just wrong.

3. Republicans should forget about winning the battle over the ‘middle class.’ Call them ‘hardworking taxpayers.’

He then asked everyone to raise their hand if they want a "job." Few hands went up. Then he asked who wants a "career." Almost every hand was raised.

"So why are we talking about jobs?"

D.W.: Of course if you are in the top 1% you most likely are not in need of a job. Careers usually come after you have a job. Luntz wants the Republicans to avoid talking about jobs and go onto some lofty ideological message about individuals creating a career for themselves.

I have a friend who is a pediatrician and owned her own home and medical practice. Her son became sick and her health insurance company dumped her. Because of her income and career the state and federal government wouldn’t help her. However, as her son’s medical bills added up she eventually lost her home and medical practice and found herself homeless before she was eligible for any government assistance. It took her more than three years to find another job in her profession. When I met her, she was serving drinks and taking orders at a coffeehouse.

Tens of millions of Americans lost their jobs and careers as a result of the Republican pushed policies to deregulate the banks. Others, like my friend, lost it all as a result of a healthcare system that is overly reliant of capitalism and profits over people. It is not their fault that the economy collapsed, they were laid off, or our healthcare system is so broken that it drives tens of thousands of families into bankruptcy each year. The nation’s high unemployment numbers are a result of the Republicans, and the Democrats alike, making policies that allowed Wall Street to take, or more like steal, hardworking American’s jobs and the retirement funds that went with them.

With advice like this coming from Luntz, it is no surprise the GOP has not done anything to create a jobs bill in congress and has done everything possible to hamper Obama’s successful 1.5 million new jobs Stimulus bill. Republicans don’t want to talk about jobs because they don’t want to actually work to fix the unemployment problem. If they did, that would have made Obama look good, and the GOP is not having any of that. This of course goes to the fact that the Republicans have proven they are willing to put their own partisan interests ahead of everyday hardworking, unemployed or underemployed, Americans that just want to go back to work.

D.W. As Republican icon Ronald Reagan famously said, “There he goes again.” Luntz wants Republicans to create an atmosphere in which Americans resent and are angry at their government. Of course we all dislike wasteful spending. But that is not what Luntz wants the GOP message to say. What Luntz is suggesting is all ‘government spending’ is wasteful. That means spending money to retrofit that bridge that is about to collapse is an example of government waste. That is why the GOP is block the presidents jobs bill that will build and retrofit a small fraction of our nation’s infrastructure

Frank Luntz is known for his gift of framing (falsely, in my opinion) political debates. Often his selective use of words seems designed to deflect and confuse Americans, not bring them to a better understanding. In a PBS interview Luntz gave in 2004, he spoke of how he uses language to appeal to American’s emotions. It is a powerful technique, but not always honest.

The first five do’s and don’t explores how Republicans would like Americans to view the rich, middle class, and poor. The list exposes the Republicans plan to turn Americans against their government. In addition, the list exploits American emotions for political gain. From my point of view, the list exposes the Republicans cynical ideology and brings to light the deep commitment to distort the truth. The second half of the list reveals how Republicans plan on framing the Occupy movement. Essentially, they wish to appear as the political party that understands the Occupy movement and supports their goals, by offering more of the same policies that economically brought the nation to its knees in the first place. Visit this site next week for part two.