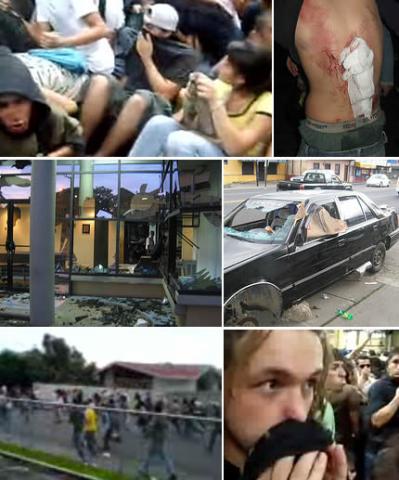 Composite image by Cristian Cambronero of Fusil de Chispas from citizen videos.
Journalist Cristian Cambronero from popular Costa Rican blog Fusil de Chispas posts a recount of Sunday’s Concert where youth rioted and destroyed the campus of the Universidad Latina in the capital city of San José. It seems that when around 3000 of them were not allowed entrance to the free concert venue where already 5000 spectators were waiting for the concert some of the irate teens destroyed the university buildings, storefronts, dismantled cars, damaged the church in the vicinity, looted, threw chairs, rocks and bricks everywhere.

This eloquent video shows the environment inside the parking lot where the concert was to take place. It is said that about 5000 people were inside. It’s enough to see the images to know that the table was set for an ever greater disaster. This user captured the exact moment when stones, bricks and even chairs flew against the University’s windows. The riot was all around the Lourdes of Montes de Oca sector, as can be seen here. In mass, the spectators abandoned the parking lot, many of them already affected by the tear gas. In the next few hours, more videos will probably appear here.

In the comment threads, many are attempting to answer as to the reasons why this violence took place. The main question in every one’s head is, why? Why this rage for not being allowed entrance to a free concert? The destruction is completely out of proportion to the alleged offense. Many blame the fact that this generation has been handed everything in a silver platter and can’t handle no for an answer. Others blame the fact that many of these teens only have the option of assisting to free concerts and are excluded from any other type of cultural activities. Some believe the rioters belonged to the higher and richer class, others conclude that they come from economically depressed areas of the city or that they could even belong to soccer team fan groups, known as violent “barras”.

Following, two video showing windows getting smashed at the university, and no police in sight.

This video shows youth running out of the parking lot, covering their faces to protect themselves from the tear gas thrown inside.