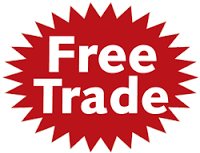 Free trade is good for poor Americans … and middle class Americans … and rich Americans. It is good for all Americans. The math is simple. The minimum wage in the United States is $7.25 per hour. The minimum wage in China is $1.16 per hour. That means that poor working Americans can buy cheap goods from Chinese laborers at an 84% discount. Middle class Americans who earn at least $20 per hour are getting a 94% discount. For rich Americans who earn more than $125 per hour, the discount is 99%. For the rich, free trade basically means free stuff.

If Donald Trump really understands the ‘art of the deal’, he must understand that free trade is the best deal America has ever gotten. It is a way to outsource ‘sweat shops’, if not, virtual slavery, to foreign lands. Free trade moves the oppressed and disenfranchised to foreign shores. It promotes domestic consumption and political tranquility.

It is true that many producers of goods have seen their jobs exported to low labor cost economies. But capitalist as a system has always been a race to bottom in terms of unit labor costs. Capitalism either reduces unit labor costs through cheaper sources of human labor or machines. At the beginning of the industry revolution, machines replaced cottage workers, then farm workers and now manufacturing workers. At the same time, sweat shops moved from London to Manchester to Brooklyn to Greensville, South Carolina and then to China, Vietnam and Bangla Dash – Mexicans are too well paid to work in the worst sweat shops.

Some of the wealthiest people in any capitalist economy are the merchants who can exploit or, to be more fair, figure out how to use free trade (or smuggling) to get the cheapest goods to consumers. That’s how the Rothschilds made most of their original money. It is the secret behind Sears, then Kmart, then Walmart and now Amazon.

Capitalists like General Motors (I worked at GM when it was a AAA company and had 50% market share), are always looking for ways to source cheaper goods to provide more value to customers. That was the thought behind the ‘Southern’ strategy of moving manufacturing plants to the rural South where unions were non-existent and wages cheap. Once the Southern strategy was in full swing in the 1970’s under Richard Nixon and Gerald Ford, it was just a matter of time before it jumped the border and headed down to Mexico and then across the Pacific to Asia. American industries that couldn’t source the cheapest labor like textiles, garments, shoes, housewares, radios, televisions, VCR’s and CD players went out of business. Endicott Johnson, RCA and Zenith no longer existence and have no employees. American makers who figured out the outsourcing model like Nike, Ralph Lauren, Apple and Sonos are prospering and creating American jobs.

During the recent election, I would get frustrated listening to the politicians in both parties. They would rattle on about saving the Middle Class, but offered up no real way to do it. The only way for working class people to get a middle class wage is to belong to a union. That is why cops, firemen, civil servants and teachers get middle class pay. That is why the jobs in auto, construction equipment, agricultural equipment and defense industries are relatively well paid. That is why it is insane that the workers at VW’s new plant in Tennessee didn’t vote for union representation and why UAW wages have stagnated since the 1980’s because the Japanese transplants were never unionized. [There has been a deal since the 1980’s that Japanese car imports can’t exceed 20% of the new cars sold in the US market; the figure is 10% in the European Union, so trade barriers do exist to protect the market share of American auto assembly workers already – perhaps they need to extended to Mexico and Canada].

If Donald Trump really wants to help the American worker, tariffs are not the answer. They will cost the American worker money and jobs. The answer is unionization. Push all the American auto assembly, component, parts and commodity plants to unionize and then place market share limits on finished auto, component, part and commodity imports. Unionization with market share limits is the way to push more working American’s into the middle class. But in the end, unionization will backfire because inflation will kick in and erode the purchasing power of all Americans.

Once inflation comes back with a vengeance, the American worker who is currently enjoying a state of near full employment will start to complain bitterly about prices and then look back at the good old days of free trade.

Just study the English Corn Laws of the 1800’s if you want to see how the pendulum between free trade and protectionism will swing.