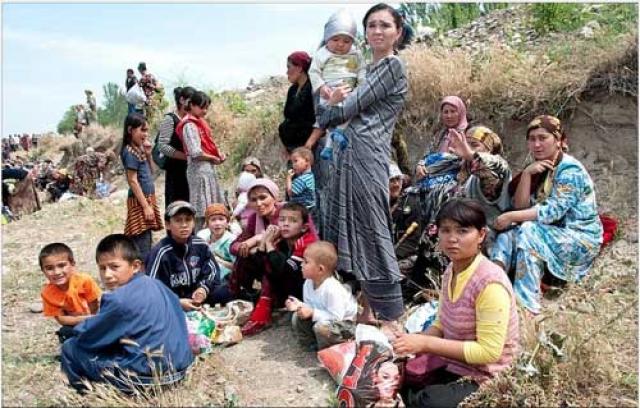 On June 10, 2010, local clashes between the ethnic Kyrgyz and Uzbek population in the Kyrgyz part of the Ferghana valley [EN] turned into a full-blown massacre and further exodus of the Kyrgyzstan-based Uzbeks [EN]. It seems that the conflict had been incited by the Kyrgyz organized criminal gangs in order to destabilize the region and might be connected with the revolutionary events in Kyrgyzstan two months earlier. Although it’s evident that, even if provoked by the criminals, the conflict has deeper roots. Refugees on the suburbs of Osh, Source: diesel.elcat.kg

Surrounded by mountains, Ferghana valley [EN], a densely populated region in Central Asia, has one of the most complicated ethnic patterns in the world. On the territory similar in size to the state of Pennsylvania live 11 mln people. The borders between the newly-established republics of Uzbekistan, Tajikistan and Kyrgyzstan had been literally drawn on a map by Stalin officials in the Soviet times, leaving more problems than solutions as they left lots of Kyrgyz villages and cities on the Uzbek side and vice versa. Poverty, rural specialization and high level of unemployment determine the overall situation.

Osh [EN], the second largest city in Kyrgyzstan, is an especially complicated case, since a significant part of its population is (was) Uzbek. The difficult relations between Kyrgyz and Uzbek populations were revealed during the Osh riots in 1990 [EN], which happened under similar circumstances and resulted in more than 300 dead and more than 1,000 wounded.

The information on what has happened during the past three days of violence and turmoil is scarce, since there’s almost no electricity in the city. However, bloggers manage to send the materials to the web. U.S.-based Yelena Skochilo (aka LJ-user morrire [RUS]), as during the April 2010 Kyrgyzstan revolution [EN], tried to collect all the major news sources. But, she acknowledged, there are too few credible sources of information:

Emotions are going overboard, but I understand and share the feeling of defenseless people… What is known for sure: there’s a fire in the Cheremushki district and fires all around the city. There are lots of provocateurs. People constantly hear shots. Let me bring one citation, which reflects the overall picture and you’ll understand why I don’t want to write a timeline. I know the author in person and I can rely on his data.
“… he called me and asked: “…so, no one is going to help us?” I wouldn’t wish this to anyone. I felt myself like a dog….I met them near the tuberculosis clinic. I took the driving wheel and shouted to everyone that he’s a Kyrgyz. With difficulties we managed to get him out of the district. On the street there were about 20 soldiers and behind them a crowd of young and not so young people of the Kyrgyz ethnicity. I don’t know what to do.”

On June 13, the conflict went online [EN], with emerging pro-Kyrgyz and pro-Uzbek accounts. (At the same time, there are significantly fewer Uzbek websites due to strict anti-internet regulations in the country [EN]). Several Kyrgyz websites went down. Registan.net, where the events were being discussed, also went down, probably due to the Digg-effect. Clearly Uzbek-biased Youtube user saveosh presented a 6-minute Google Maps video [EN]. Although being a valuable source of information, the video presents a version far from neutral.

Twitter tags #Osh, #Uzbeks, #JA (for Jalalabad, the second city where the clashes also took place) and #freekg were used to group tweets on the event.

Filed under: World
Share Tweet Pin G Plus Email
previous article: Why Israel Can’t Be Trusted
next article: Pentagon: Afghanistan Could Be ‘Saudia Arabia of Lithium’