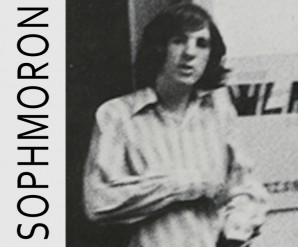 Minneapolis-St. Paul, MN-WI – While the current pope makes the cover of “Rolling Stone” magazine, the pope back in the ’60s and ’70s made headlines from a renewal of Catholic doctrine. The renewal, called “Vatican II,” swept through the Catholic church and changed the way priests held church services. Catholic education changed, too, often toward experimental approaches. Growing up through that change is recounted in the humorous and poignant online memoir entitled “Sophmoron,” by the author, Gerald Sedgewick.

Sedgewick, a 58-year-old consultant and author, posts weekly, chapter by chapter, to geraldsedgewick.wordpress.com. He started posting in December, 2013. When the memoir is completed, he will look for a company to publish it as a book.

“I’m doing it myself and taking care of the marketing beforehand by building readership,” Sedgewick said.

The memoir recounts pre-Vatican II, elementary school stories from Mount Morris, Michigan, a suburb of Flint. The teachers at that school were left to their own devices. Sedgewick recounts a teacher who locked a Mexican-American student into a locker, repeatedly thumped a classmate’s head with his knuckle-buster ring, and lifted a girl by her hair off her feet. In Sedgewick’s account about the Mexican-American student, he sneaks in wry humor:

“The bell rang and we went to our next class, each of us knowing our classmate was in the locker, but none daring to open it up to let him out. I don’t know if he yelled for help, if he banged on the metal locker to get our attention, or if he remained mute like that woman in the movie ‘The Pit and the Pendulum.’ Her locker was riddled with sharp spikes ready to pierce her when she could stand no longer. So he had it way better.”

Sedgewick also recounts the cultural change overtaking the country and how he experienced it. He watched the television serial “Kung Fu” when visiting a friend whose mother went through primal scream therapy. On one occasion he learns from his friend about an incident with her mother, when her mother primal screamed and then threw scissors toward her head.
Sedgewick comments in his memoir, “At the time I didn’t think about it, but it was a good thing she watched ‘Kung Fu.’ I couldn’t imagine having the quick reaction time necessary for ducking when my own mother would take me by surprise after a blood-curdling scream, and then throw a scissors-missile at my head.”

In the stories he chooses for the memoir, Sedgewick says he “doesn’t have an ax to grind” with the Catholic church or with his education. In his writings, it’s clear that he harbors religious sentiment toward Catholicism with his childhood feelings over a girl who miraculously received First Communion before she was of the proper age.

“I’m writing this memoir for two reasons,” Sedgewick said. “One is purely personal: Even though parts of growing up are painful to recall, I feel a strong need now to go back. The other is that I see kids nowadays in a situation where they can’t make mistakes without huge consequences. Before “No Child Left Behind,” 9/11, and parents dominating their kid’s lives, we could have fun amidst the difficult parts. I want to tell that story to my own kids, and others in their generation, even with all the mistakes I made.”