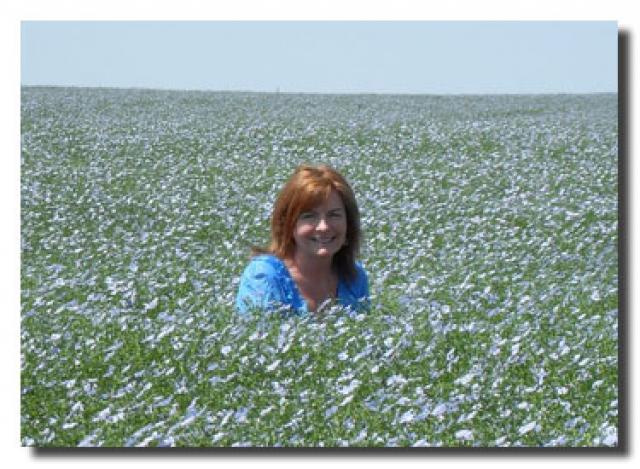 She’s a fifth generation  grower on the family  farm, and knows the average person can mix flax seeds to salads, soups, cereal, juices. or baked goods for a nutritous meal, or snack.

Not short on motivation, Stober finds her work rewarding. In these uncertain economic times, her business is able to provide jobs in her small community.

"We are able to employ people who normally would have to drive 30, or more miles to find work, since the local grocery store closed. Creating jobs is  a great assest, " she said.

Stober has a history of being community-minded.  "I had  the opportunity to travel to Siberia to help educate farmers on different ideas for income in 1992," she said.

Her time in Siberia may not only  have produced more enlightened  farmers, but also anecdotes.

"I have to tell you about my experience in Siberia, a Trans- Siberian railroad  train took off without me, and I was running behind the train in the middle of nowhere in Siberia.  I went off to get food, and the train whistle blew one time, and the wheels started moving. the hostess had pulled up the steps and shut the door, mind you, I’m in the last car of the train.  No placed  to board, I was literally running alongside, and my friends were trying to reach out to grab me, but suddenly all I saw was the back of the train," she said.

She recounts that someone on the train spotted her, and the train screeched to a halt. "I heard the screech of the brakes, and all I could say was the only word I knew in Russian, speciba- thank you," she said,

Based near  Goodrich, North Dakota, Stober said she’s been operating her company, Flax USA, Inc. since 2001.

Asked to what is unique about her company, she said flax is one of the richest plant sourcse of Omega 3 Essential Fatty Acids and   rated as one of the top 8 "super foods."

As a serial entrepreneur, Stober said she’s been self-employed since 1979, first as an independent Mary Kay sales director, and later raising exotic animals for fifteen years.  "Chinese Shar Pei dogs, fainting goats, pot belly pigs,  minature sheep, donkeys, cattle, as well as Emu, and  Icelandic horses, just to name a few," she said. Stober said she shipped the animals  all over the nation "to help others make use of their farm life with an added income."

She describes Goodrich as being in "the middle of nowhere," and that she has to travel three miles to contact the nearest neighbor, six miles to reach the epicenter of the  main town, but  she has not let location thwart her  business plans.  "Location is not always the important thing. Have a dream and do all you can to make it come alive," she said.

"Goodrich, which is 6 miles away, is about a town of 100.  We still have our own school,. Our daughter Jessica will be a  high school senior next year, and there  and eight in her class,  which is the biggest class in many years. Most classes are 2-6 people.  The whole school K-12 is about 40 kids!  Great quality education.  Great place to raise a family and affordable housing," she said.

Her enterprise may be one of the most renowned entities in Goodrich, apart from the Avon lady.

"Rosie Gries, the famous Avon lady was on Johnny Carson ,and on Jay Leno. She was a consultant for 50 years, Avon awarded her with a car, and she kept selling till almost 100 years old," she said.

Stober explained her family originally established the farm in 1901, and she and her husband, John now run the day to day operations.

Stober started down the path of making her dream to grow and market flax seed a reality, via craft and garden shows.  "I started selling one on one to customers by educating them on the benefits of flax seed," she said.

She admits there have been struggles along the way, but the family has been resilient. "I love the challenge of being creative, being my own boss, and opportunity to grow a business," she said.

Asked her definition of success, she said keeping fear at bay.  "Don’t be afraid to try, because the biggest failure is never to have tried at all."