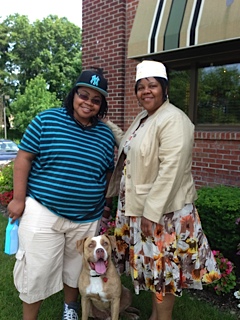 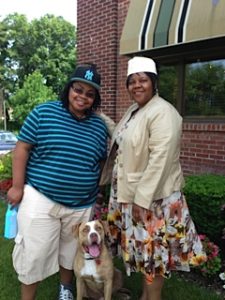 According to the National Center for PTSD, women are more likely than men to develop post-traumatic stress disorder, (PTSD) and about 10% of women develop PTSD sometime in their lives compared with 5% of men. Sabrina Lacey and her daughter Daja are military veterans who both suffer from PTSD. Through their “Paws of War” program, animal rescue group, Guardians of Rescue, is stepping in to help.

Guardians of Rescue’s Paws of War program helps place trained rescue dogs with veterans suffering from PTSD. Back in March, the animal rescue group rescued all of the dogs from the Ft. Bragg Animal Shelter & Adoption Center, located on Ft. Bragg, home of more than 56,000 Soldiers. One of them was a pit bull mix named Tank. After months of training, Tank will finally meet his new owner, Daja Lacey, this Friday, June 28, the day after National PTSD Awareness Day. Sabrina Lacey will also be receiving a dog on this date. Both Daja and her mother Sabrina are military veterans suffering from post-traumatic stress disorder. Sabrina is a post-commander of her local VFW and a retired disabled veteran.

PTSD is a condition among military veterans. It is a psychological condition that can arise after someone has experienced a traumatic event, such as being directly involved in combat. It is estimated that around 400,000 veterans currently suffer from PTSD. Animal therapy has proven to be beneficial in helping veterans overcome the condition. PTSD, according to the National Institutes of Health, changes the body’s response to stress. Some of its symptoms include flashbacks, upsetting dreams, feeling emotionally numb, hopelessness, memory problems, and avoiding doing things that were once enjoyed.

“PTSD is a real disorder that affects thousands of veterans, both active and inactive, across the country,” says Daja Lacey. “We are very thankful to Guardians of Rescue for rescuing Tank and many others, and now Tank will help to rescue me,” she adds.

“We work hard to rescue these dogs and it’s very rewarding when it all comes together, and we finally get to pair them up with military veterans in need,” says Robert Misseri, president and founder of Guardians of Rescue. “We believe that heroes deserve heroes.”

Guardians of Rescue is a non-profit organization aimed at Animals Helping People and People Helping Animals. They provide food, veterinary care, and shelter to animals in need. Guardians of Rescue founded Paws of War and Operation No Buddy Left behind programs to help active military and veterans with the use of therapy dogs to assist in post-traumatic stress disorder. To learn more or donate, visit www.guardiansofrescue.org.