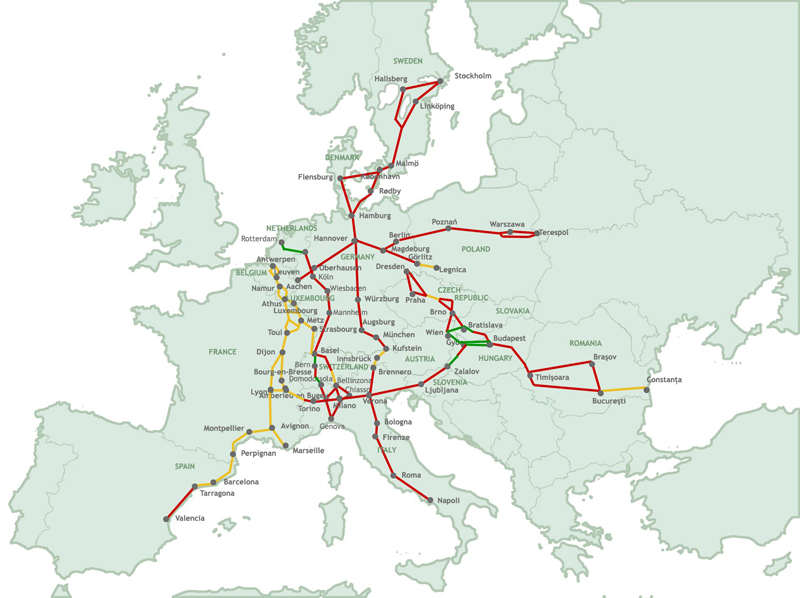 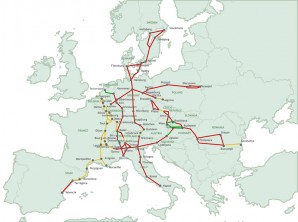 Map of European multi billion dollar infrastructure railway freight improvement project – it will give Europe a competitive advantage over US business interests. Meanwhile the Pentagon refused to discuss how much and where European Infrastructure improvement funds will be spend. In this case if were not helping fund the railway project we are certainly subsidizing Europe for it? At the same time the US operates on a 60 year old railroad system that is plagued with problems. Not to mention US transportation infrastructure which is exemplified by crumbling bridges, pot marked roads, and chronic airport delays? That’s your tax money at work America?

“Secretary Hagel fully supports the president’s overseas contingency operations (OCO) request for Fiscal Year 2015, which includes $58.6 billion for the Department of Defense and provides the department with the resources it needs to protect the broad range of U.S. national security interests. This is nearly $21 billion less than last year’s OCO request, representing a 26 percent reduction in OCO funding as our nation concludes 13 years of war and our mission in Afghanistan transitions to a training, advisory, and assistance role post-2014.

The OCO request includes the president’s proposed $1 billion European Reassurance Initiative, more than $900 million of which is allocated to the Defense Department. These funds will help us improve the security of our NATO allies and partner states by increasing exercises, improving European infrastructure and allowing us to enhance the prepositioning of U.S. equipment in Europe.

Also included in this request is the $5 billion Counterterrorism Partnerships Fund (CTPF). The CTPF builds on our existing tools and authorities to respond to a range of terrorist threats and crisis response scenarios, and is designed to help build the counterterrorism capacity of partner states from South Asia to the Sahel.

If approved by Congress, the $4 billion dedicated from this fund for the department will allow us to train and equip appropriately vetted elements of the moderate Syrian armed opposition — ultimately helping the Syrian people defend themselves against attacks by the Assad regime and weakening extremists like ISIL, who have found safe haven amid the ongoing conflict. The secretary has directed his staff to begin developing more detailed plans to carry out the train and equip mission, if approved by Congress.

The secretary urges Congress to approve the overall OCO funding request and looks forward to working with Congress to complete the appropriations process.”

We contacted the Pentagon which refused to discuss particulars of the OCO funding request with what they call “unapproved media sources’?

See related article: How Should We Tackle America’s Transportation and Infrastructure Woes? http://www.forbes.com/sites/hbsworkingknowledge/2014/03/14/how-should-we-tackle-americas-transportation-and-infrastructure-woes/