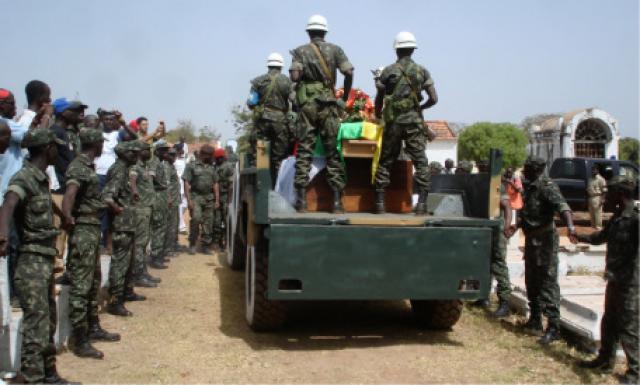 Going ahead with the election is “essential for the attainment of peace, stability and the return to constitutional normality and democracy in the country,” said Joao Bernardo de Miranda, the AU’s special envoy to Guinea Bissau, on National Radio of Angola, reports Agence France-Presse.

Dabo and Proenca were killed separately Friday by members of the military sent to arrest them for their alleged involvement in a planned coup against the government. The interior ministry claimed that the leaders of the coup were planning to “physically eliminate” Prime Minister Carlos Gomes Junior and Military Chief of Staff Jose Zamora Induta, reported AFP.

There were also reports that former Prime Minister Faustino Fudut Imbali was killed, but a military source told AFP that he was in police custody after being arrested and severely beaten by soldiers.

The killings are the latest in a longstanding conflict between the Guinea-Bissau government and politically powerful military, as the country has “lurched between coups, mutinies and uprisings since independence in 1974,” reports Reuters.

“Power in Guinea-Bissau does not come purely from polls … You can win power in polls but to exercise power in the long term you need allies at the heart of one of these militias,” said former Prime Minister Aristide Gomes to Reuters.

The military was responsible for the assassination of President Joao Bernardo “Nino” Vieira in early March, following the death of Gen. Batiste Tagme na Waie, the armed forces chief of staff and chief political rival of Vieira, in a bombing attack just hours earlier.

According to journalist Jean Gomis, Dabo, an ally of Vieira, may have been killed because military leaders feared he might “prosecute those responsible for killing the president if he won the election,” reports the BBC.

The continued instability of the government, along with national poverty and geographic location on Africa’s west coast, has caused Guinea-Bissau to develop into one of the largest hubs for the South American drug trade. The instability, and the country’s descent into a “narco-state,” will continue until the army is reformed, says both Gomes and Antonio Afonso Te, former deputy military chief of staff and alleged member of Proenca’s plot.

“To get out of this permanent cycle of crises we must identify the causes of the instability … starting with the army,” he told Reuters. “The army is a group of militias which are tearing themselves apart between rival warlords, clan chiefs.”

Background: the political history of Guinea-Bissau

Guinea-Bissau, a small republic on the West African coast, is a former Portuguese colony. In 1974, after years of guerilla fighting led by the African Party for the Independence of Guinea and Cape Verde, it was given independence, describes the BBC.

Luis Cabral, brother of assassinated PAIGC leader Amilcar Cabral, ruled for the first six years of independence before Viera led a military coup to overthrow him. He helped modernize the economy and move to a multi-party system, and in 1994 he was elected president in the country’s first free elections.

In 1998, after Viera fired an army commander for allegedly smuggling arms into Senegal, the army staged a mutiny, starting a civil war that ended in Viera’s ouster and exile in May 1999. The next presidential election was held in 2000, which was won by Yala.

Yala’s tenure was marked by conflict with parliament and erratic behavior. He was removed from power in a bloodless military coup in September 2003, but maintained belief that he was the rightful ruler of the country. A special presidential election was held in 2005, in which Viera—who had returned from exile—defeated Yala.

During his term Vieira faced continued resistance from the military. The “swollen, ill-disciplined military” is well-armed due to a 1998-99 civil war and full of aging officers who fought for independence from Portugal in the 1970s. “Civil society organisations have accused leading political figures and Balante military chiefs of using soldiers as personal militias, including to protect drug smuggling,” says Reuters.

Over the past several years, Guinea-Bissau has developed into a center of the Latin American drug trade. The country’s many islands and inlets are difficult to police, especially for a government as poor as Guinea-Bissau’s. International observers fear that it risks developing into a “narcostate” if it cannot adequately police its shores.

“The situation is so serious that government stability is threatened as drug traffickers extend roots into ministries, the army and the police, according to various sources familiar with the trade who spoke on condition of anonymity,” wrote IRIN in 2007.

Sources used in this story: