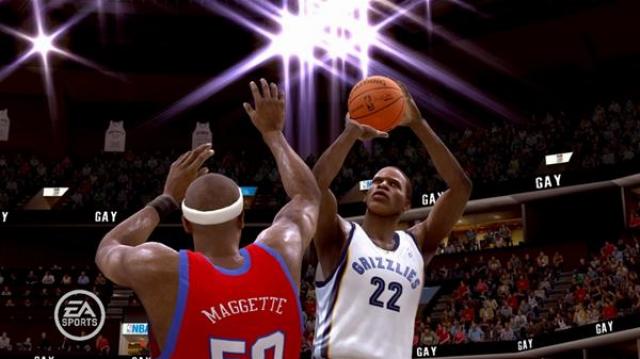 If you’re a basketball fan and a gamer, you probably feel compelled to buy a new NBA game every year for updated rosters if nothing else. This year, the one to buy is not NBA Live 09.
EA Sports’ NBA Live 09 is an improvement over last year’s iteration… but it’s not like the bar was set very high in 08, so "improvement" is relative.

That said, there are several things NBA 09 does well, including the new playcalling and pick-and-roll systems — a little old school, but in this case going back to the basics a good thing. In short, controls are easily the most outstanding part of NBA 09.

Unfortunately, some of NBA 09’s marquee features aren’t as sharp or just don’t work at all. The Dynamic DNA system, for example, is supposed to track the stats of real life players’ and integrate them with the game on-the-fly, daily. While it works great, it’s also hopelessly inconsequential more often than not and you’ll like not spot any significant changes when/if playing day in, day out. So not so much a "marquee" feature as an oversold tack-on.

Also, NBA 09’s "Be a Pro" mode, the "role-playing" career feature used in several EA Sports titles, has now made it’s way into EA’s annual basketball franchise. Sadly, it too is mostly hopeless as it basis all your budding stats and attributes off one single game played. In real life, that could stymie any prospect’s chances (or net a huge signing bonus for naught). Ridiculous.

NBA Live 09 also sports some visual mishaps that are just perplexing for a sports game of this era. You can pass a ball right through a player, for example. Not over, not around, not between the legs, but right through their torso.

And there’s a lot of slow down during replays. Not slow motion, but shame-faced, animation-chugging, can’t-compute-fast-enough slow down.

NBA Live 09 begs a natural comparison to 2K Sports’ NBA 2K9, and the former falls incredibly short when stacked up against the latter.

That said, no basketball game franchise has made any significant jumps in quality this year. But NBA 2K9 did just so happen to jump from a loftier perch to begin with. NBA Live 09, meanwhile, seems to have merely hobbled on up.

Filed under: Opinion
Share Tweet Pin G Plus Email
previous article: "We will give tough fight to Mumbai"
next article: History of The Barclays Premier League