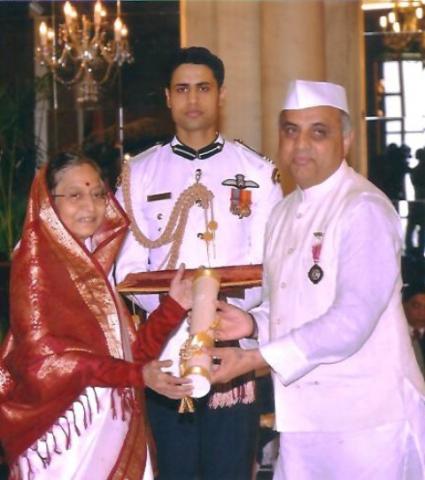 Mr Verma has been conferred the prestigious civilian award for his lifelong social work, besides his contribution towards spreading Gandhian ideology in the society.

A renowned social worker and noted Gandhian from , he has been continuously working to motivate misguided youths of towards nation building through the various NGOs and voluntary organizations for the last three decades.

Born on February 25, 1954,  Verma joined PWD as a Junior Engineer in 1974. In 1990, he came in contact with eminent Gandhian Didi Nirmala Deshpande who was on a mission to militancy hit state-J&K and spread the message of peace and harmony in the state.  Verma joined the mission with her and later left his Government job to accomplish the task of enlightening the young souls in in accordance with the Gandhian way of life. He migrated to Kashmir valley and spread the movement throughout the length and breadth of the state, particularly in highly militancy infested areas of Kupwara, Baramulla, Budgam, , Pulwama, Anantnag, Doda, Udhampur, Rajouri and Poonch. He was appointed the Founder President of Akhil Bharat Rachnatmak Smaj for and later was also given the responsibility to be its National General Secretary. He worked all these years with devotion along with a team of locals to propagate Gandhian ideology to provide solace to the wounds of the militancy hit people. He made a group of resourceful elderly persons from different fields and organized hundreds of conferences, seminars, workshops and awareness programmes involving thousands of local people at various locations of the state to build an era of confidence amongst all the sections of the society and created awareness against the social evils prevalent in the society such as corruption, dowry, injustice, drug-abuse, female foeticide, child labour, social inequality and gender bias.

Verma organized 18 Sadbhavana Yatras consisting thousands of Gandhian workers from various parts of valley to the other parts of the country for their interaction with the people. He has decorated thousands of activists working for peace with Mahatma Gandhi Seva Medal worldwide to encourage them to work with more zeal and enthusiasm. With the cooperation of his dedicated team, he organized symposiums on truth and non-violence in all the state educational institutions.

Later, this successful concept was extended to other parts of the country as well. More than One lakh copies of Mahatma Gandhiji’s autobiography, ‘My Experiments with Truth’ in Hindi, Urdu and English were distributed through him among the people of J&K state to make the general public know more about Gandhiji.  Verma also remained associated in organizing All India Gandhian Samelan annually at various locations of the country from 1990 onwards. He also organized twenty National Integration camps in various pockets of the state.

Verma is the recipient of various awards and honours.