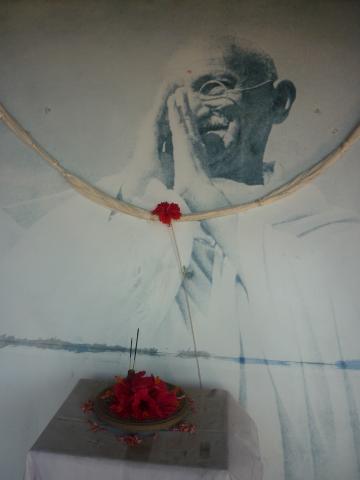 Mahatma Gandhi is the father of our nation. We have read a lot about him in books, but to understand his importance you should go to places like Dandi. A Week back I was in Dandi and I was inspired when I learned about the works of Gandhi and how he accomplished them with facing number of hardships. For all he did, he inspire his people, he fought for their rights.

Mahatma Gandhi completed the Dandi Movement in 24 days on April, 6 1930. He started his journey from Sabarmati Ashram, Ahmadabad to the Shore of Dandi. This March wasn’t an ordinary march although anyone can pick up salt and walk up to 20 km every day.  However, his wasn’t a superfluous act but the desperation to inspire the people to fight for their rights and to tell them that it’s senseless to pay tax for something on which no one has the right was commendable. The time when the World‘s economy was down and Gandhi realized if you want to break someone’s backbone, hit his bank account.

To my understanding, Mahatma Gandhi wanted to agitate against the Colonial Rule as he realized that the foreigners were already under pressure due to their Economic Downfall.  Also, the Danger of War (World War 2 started in late 1930) was hovering over their heads. Mahatma Gandhi wanted nationwide Civil Disobedience movement and he also got succeeded.  Mahatma Gandhi took advantage of this weakness of the Colonial Rule in India and hurt them at the right place, at the right time.

He also knew that the government would take actions against him and his followers and then he will be successful in bringing the movement to the notice of entire nation and so making it a mass movement.

He knew there would be violence by the British and his movement would be scrutinized at every level. He was aware of the possibilities, his attempt would be maligned in public but his sincere attempt and his foresight got him the right results for himself and his countrymen.

His main aim was to break the Colonial Rule and also to educate the People of India about their ignorance and also it was step to bring Indians more closely towards their self belief and self reliance.

Reading about Gandhi makes me feel that he wasn’t self centered and he always thought for others. It is very difficult to understand why someone would ever march from Sabarmati to the seashore just for himself unless his love for his countrymen was infallible.

Mahatma Gandhi was committed to inspire the people of India. He always put his countrymen before himself. He was locked behind bars so many times but still his self belief kept alive. From Dandi, I gathered a wonderful understanding about life and it was that “Never let your Self Belief Die”. Not only he had strong self belief but also he was a great visionary. Even before his Dandi Movement, he sent a letter to Lord Irwin (Viceroy during that time) to abolish the Salt Act but his plea was unheard. He had no option left and he planned the Dandi March.

In Life, many a times we all do things before thinking, but he had his strong reasons behind each and every decision.

I want every reader to Think: “ Isn’t it foolish to walk and march rather than going in a bus or a car” but this was his philosophy.  He knew how to inspire people, and to do that you have to do something extra ordinary. He could have reached the shore of Dandi in a single day, but he knew that wouldn’t make an impact on the minds of people and his attempt would have gone fruitless. This shows his strength as a visionary.

I am inspired from my trip to Dandi to do something wonderful for humanity, for the people and all those who expect more from me.  Mahatma Gandhi’s love for his countrymen was apparent and I also want to feel the same love and respect for my country.

During this trip to Dandi, I felt that Mahatma Gandhi wasn’t a biased person who differentiated between religions. As during his march he stayed in a Wora’s house (Wora is a Muslim community). This inspired me to think about the world as one. It made me feel if God didn’t differentiate between religions.  If the creator of all doesn’t differentiate between religions, then why do humans?  We have no right to discriminate any human being on the basis of his religion. It was one of Gandhi’s main aims to unite all religions in India during those days of movement but somehow, even today this goal hasn’t been achieved.

Mahatma Gandhi had a great philosophy and I believe if the governments around the world adopts his philosophy, then the world would be a safer place to live. Some Leaders after Gandhi such as Martin Luther King Jr. followed the philosophy of Gandhi and followed the path which helped King to attain his goal of reuniting America as one, helping him to demolish the difference between Blacks and Whites.

Gandhi’s Ideas were always meaningful. He had a good descriptive reason behind each and every movement he took. If this philosophy is adopted by the people, then the level of crime would automatically decrease because people would think before they act.

We do not expect the people in today’s world to march for salt from Sabarmati to Dandi, but we hope that people might adopt Gandhi’s vision, the one he had for every human of this earth. We want for every human being to live a serene life. That he or she doesn’t start a fight with the one who disagrees with them. They must take an action which indirectly sets a message for his opponent that if you won’t listen to me then I won’t harm you but this is what I can do. This was Mahatma Gandhi’s way of working.  He wouldn’t raise his hand, but he would let his distract-er know that he disagrees with them and he will not let them have things their way.

Mahatma Gandhi had a special inherited skill of controlling his emotions. He won’t let his emotions be out in public. I wish I was also so patient. I wish I could gather such skill and be more patient someday.

Dandi was a wonderful trip. I learned a lot from it. I learned about the mistakes I make and I also understood with this trip how I can correct them with my patience. I am Inspired to adopt the way of Mahatma Gandhi someday in my life. I know everyone cannot be Gandhi, but learning from his goodness is not a bad idea, maybe because you get to learn about such visionaries once in a life time.

This is what I learned from my trip to Dandi.  I hope that my message might make a little impact on the children of the world. These were the views I brought from the Land on which Gandhi marched.

Hope can help the world