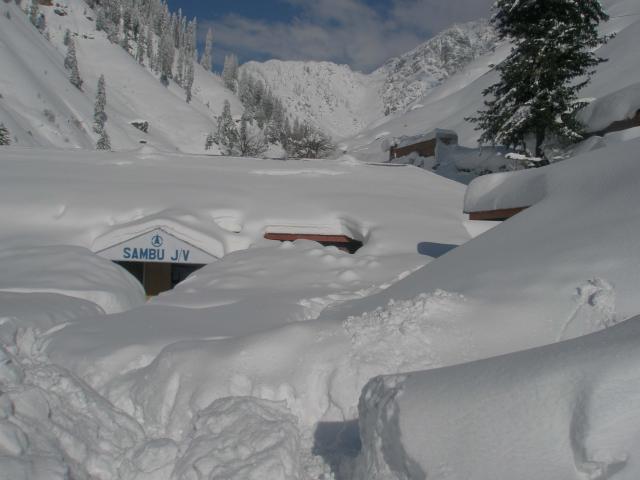 CHITRAL: Main road of Tehsil Lutkoh (Garamchishma) had blocked by heavy avalanche and glacier after snowfall as well as the road was also blocked by continues  land sliding. As a result thousands of people remained strained in the area and could not reach Chitral for more than one month. During this period injured persons, patients and ailing people especially those women who delivered babies in Chitral hospital were also crossing this road by feet covered by land sliding and avalanche and were facing great difficulties.  Deputy Director of Works and services department said that they removed debris and snow from the road so many times but it continuously slipping from mountain. Hence they recently removed the debris and cleaned the road but even than there are heavy stones and big ditches in the main road. Commuters facing great problems while they crossing this road especially patients and injured persons when they are rushing to DHQ hospital Chitral because there is no health facility in the area and the civil hospital is running without doctor.  This is the constituency’s area of Provincial Minister for Population welfare Saleem Khan local people disclosed that the road was opened before arrival of Provincial Minister to Chitral. Nadir Shah general council of Union Council Lutkoh and a leader of PPP have appeal provincial government for earmarking fund for blacktopping of this road along with retaining wall at River side of the road. It is worth to mention here that Garamchishma  river is famous for trout fish and the avalanche slipped from mountains have covered the river while water passing inside the glacier which presenting a very good look. It also seems just like Lawari tunnel with a round hole and upper head of snow ices attracting domestic and foreign tourists.  While the peaks of mountain iin surrounding areas are fully covered by snow  wearing a white sheet and shining in moonlight very beautifully.