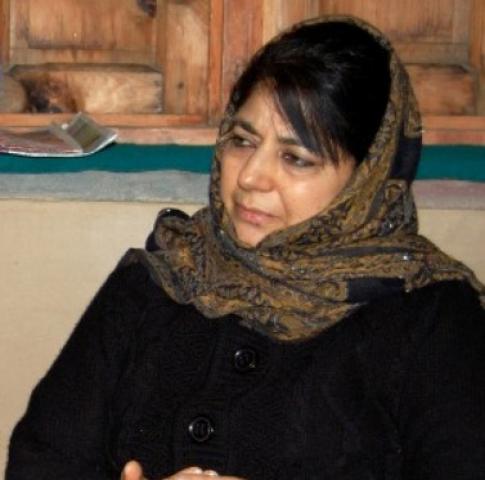 Srinagar,November 16 (Scoop News) – Union minister for petroleum Veerapa Moily has said the Government of India was actively considering a raise in the cooking gas cylinder cap in case of Jammu and Kashmir. The assurance came when the Peoples Democratic Party (PDP) president Mehbooba Mufti called on him in New Delhi on Thursday. She was accompanied by MLA Pahalgam Mohammad Rafi Mir.

Mehbooba pleaded with the minister that Jammu and Kashmir could not be treated at par with other states in view of harsh climatic conditions prevailing here and the fact that most of the population has to face sub zero temperatures for months together. She said in absence of alternative sources of fuel the cooking gas had become a tool of survival in J&K. “The fact that most of the hydro power generated in the state went into the national energy pool made it all the more imperative that the cap of subsidized cylinders is raised at least to 12 per year” Mehbooba told the minister.

The PDP president also urged the minister to set up two additional bottling plants for the valley in north and south Kashmir. The existing plants she said failed to cater to the requirements fully which was cited as a reason for the irrational decision of south Kashmir being linked to Jammu for gas supply. She told the minister this arrangement was extremely negative in view of the traffic congestion on Jammu Srinagar Highway and frequent blockades in winter months which is the peak season for gas consumption and demand.

Conveying her deep anguish to the minister at the severe shortage of cooking gas in the state, Mehbooba urged the minister to speed up the process of opening more counters at block level. She said the inability of state government to intervene positively in tackling the crisis had resulted in thriving black market. She informed the minister how a citizen had lost his life in his struggle for getting a gas cylinder which she said depicted the miserable conditions in the state with lines of the consumers getting longer everyday. She told the minister this procurement of gas had become a painful process in the state especially in colder areas where temperatures had already dipped to zero.