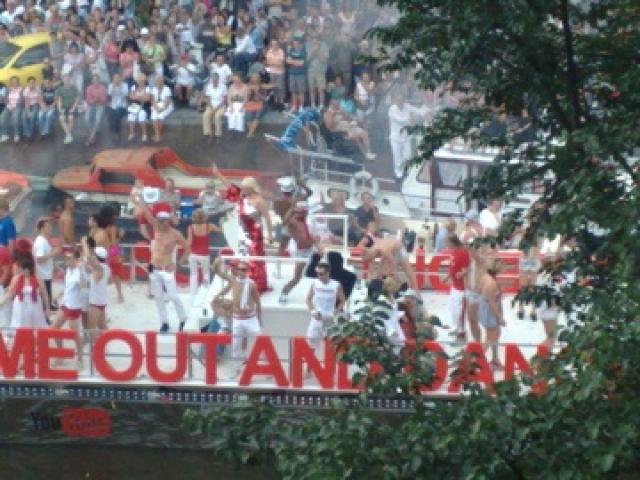 Twice a year, Amsterdam turns into one big party. On 30th April we have our Queen’s Birthday when 750,000 people in addition to the 800,000 inhabitants colour the city Orange.
The other event that attracts thousands of people is the Gay Pride.

Gay Pride started in 1969, (then known as the March on Stonewall) as a protest against discrimination and violence against gays in New York City. It has since spread around the world and Amsterdam is an enthousiastic front-runner. The unique Amsterdam character comes into its own with the Parade taking to the water – boat after boat loaded with men and women situated against the gorgeous historic canal houses creating an interesting contrast between then and now.

Amsterdam was lucky this year, the weather was very pleasant which only meant thousands of viewers lining the canals and admiring the boats but also making it even more attractive then usual for the participants to shed more clothing. The energy levels displayed by the thousands of dancing and swinging occupants of the boats worked contagious and both spectators and particpants had a wonderful time.

Unique amongst Gay Pride worldwide is the fact that here in the Netherlands every layer of society is represented and everyone participates, true to the tolerant Dutch nature. For instance – the first boat rocking past the crowds was manned/woman-ed by the Police, followed by a boat carrying amongst others  the Mayor of Amsterdam. Then there were a large number of individual boats built by enthusiasts, and finally closing the Parade,  a number of boats by companies such as Shell, ING and TNT – all under the label "Corporate pride equals Personal Pride".

The enclosed pictures speak for themselves. Like all other years –  the Dutch Gay Pride was visited by hundreds of thousands of people.