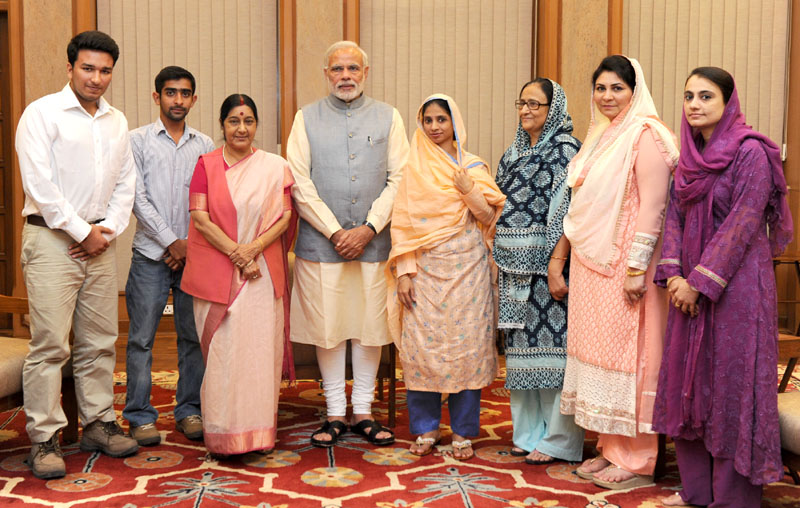 Ms. Geeta, a differently-abled Indian woman who accidentally crossed over to Pakistan, a decade ago, meeting the Prime Minister, Mr. Narendra Modi after her return to India, in New Delhi on October 26, 2015. The Union Minister for External Affairs and Overseas Indian Affairs, Mrs. Sushma Swaraj is also seen.

New Delhi (PIB-GR-TYP-BIN): Ms. Geeta, the differently-abled girl who had accidentally crossed over into Pakistan many years ago, met the Prime Minister Mr. Narendra Modi, this evening. She had returned to India earlier on October 26.

“Welcome back home, Geeta” said the Prime Minister, as Geeta embraced him warmly. He assured Geeta that every effort would be made to trace Geeta’s family, and that she will be looked after well. “All of India will take care of you,” the Prime Minister said.

The Prime Minister complimented Ms. Bilqis Bano Edhi, Founder of Edhi Foundation, Karachi, for taking care of Geeta with love and affection for so many years.

The Prime Minister announced that India would give the Edhi Foundation Rs. 1 crore, as a token of appreciation, not just for taking care of Geeta, but also for the wonderful work that the Foundation has been doing.

Upon learning that Ms. Bilqis Bano Edhi was born in Bantwa, in Junagadh, Gujarat, the Prime Minister invited her to visit Junagadh along with her family.

External Affairs Minister, Ms. Sushma Swaraj, who was present on the occasion, also complimented Ms. Bilqis and the Edhi Foundation for the love and affection that they have showered on Geeta.