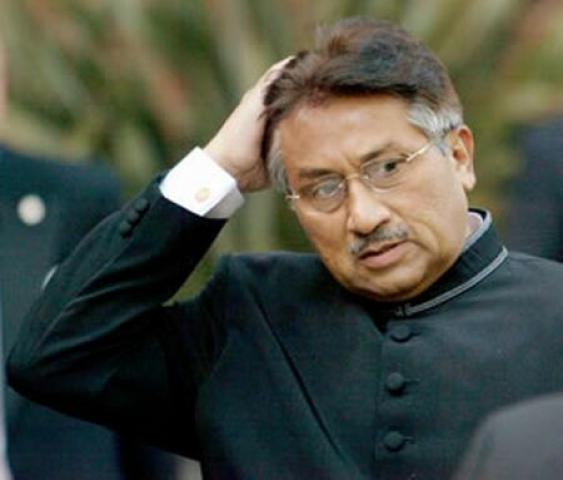 Saeed Minhas
From various scandals to conspiracies, from missing persons to missing voters and now references, everything continues to haunt the present regime, as it is nearing its ultimate end and preparations are afoot to install a caretaker set up to hold the elections around 15th September as per aspirations of the satellite-king-makers of our sovereign land.
As has been mentioned yesterday in this gallery, reference spree has ensued and first of such was filed against Prime Minister Shoukat Aziz mentioning sale of Pakistan Steel Mills to his buddy Arif Habib and others besides making profit through Arif Habib and Aqeel Dhedi from the crash of Karachi Stock Exchange.
Opposition sources also confirmed that they are mediating to move impeachment against the President on grounds of violating the constitution, waging a war against Pakistanis and killing scores of them, and failing to take action against the killers of 41 people in Karachi on May 12 besides many other allegations including that of Bugti’s killing.
The government ministers are still trying to play their dictated role and kept supporting the General and Prime Minister on the grounds that whatever they have done was in favour of Pakistan and has resulted in booming economy. They, however, were as appalled as the common citizen of the country that who actually is pulling the strings and not letting the storms against the government cool down. One after another keeps brewing and on each occasion the government seems lacking any plan B or what the military elite says a contingency plan. Lacking any communication skills, government dummies look pathetic while defending the uncalled for actions of the General or the Prime minister and now of the Speaker National Assembly Ch Ameer Hussain.
Meanwhile, caretaker set up remained a hot topic at the presidency where not only under-surveillance Chaudhary Shujaat, Waseem Sajjad and prime minister called upon the president to discuss the upcoming elections and uniform of the president, date of the fresh elections also came up for discussion. Sources privy to the meetings, informed this scribe that the president has been asked to hold election around September 15 before it gets too late. As for the political upheaval and the current war of references is concerned, sources said that the General seems less bothered because of the assurances of the visiting delegates from US.
Sources opined that since it has been decided that elections has to be held before the Presidential elections, therefore it’s not a matter of if but it’s a matter of how quickly the General can hold the elections. However, they said that one should not read too much into satellite messages because looking at the history of these satellite dictator-lovers, one finds that they hurled Philippine president into elections amidst political chaos during Donald Regan’s days but when the storm did not stop even after that he was airlifted to let the B-team take control by flying in the exiled leaders. No matter what, the General, sources said, feels comfortable enough after a very open support by the former chief of intelligence and currently the deputy secretary of state Negroponte and is ready to abide by the rules laid down for the next set up.
Sources said that premier has been asked to use services of self-acclaimed negotiator Chaudhary Shujaat and invite opposition parties, or at least try to invite them and the same he did during his concluding speech on budget. The purpose is to ensure that elections are held without any incidence under a proposed code of conduct and the General has also agreed to allow all the international monitoring agencies to come to Pakistan to see for themselves the conduct and transparency of elections process. Services of NADRA might also be hired in this regard to update the voters’ lists and quell the criticism of the opposition parties about the missing votes.
Coming back to war of references, it might be easy for the prime minister to duck the Steel Mills issue by referring that the matter is already in courts and thus becomes sub-judice and then he has already survived a vote of no-confidence on this issue, but how he would be able to defend his connections with Arif Habib-Aqeel Dhedi duo, who were considered main manipulators of the 2005 stock Exchange Crash which siphoned off over US $ 80 billion of common people.
Tariq Hassan, a main character of the stock exchange crash, not for being part of the Habib-Dhedi duo but for being holder of information on key players in this issue, might be asked to re-surface at this time by certain well-wishers of the president. He certainly holds vital information on the issue and when he hinted at naming the persons behind this, Shoukat Aziz removed him abruptly and did not even allow him to make the June 2005 inquiry report an issue in the power corridors.
Whatever the outcome of this chaotic political framework, the drama is certainly heading for its climax and some more unexpected wars might surface to the amusement of bewildered Pakistanis.
Filed under: Politics
Share Tweet Pin G Plus Email
previous article: Hip Hop apologies
next article: Visa restrictions overseas cause drop in US tourism