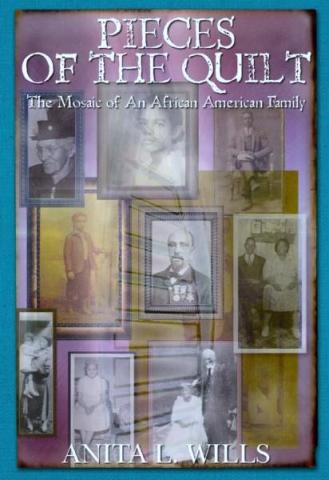 Horace Mann once wrote: "Habit is a cable; we weave a thread of it every day, and at last we cannot break it." For two decades, author Anita Wills made a habit of researching her family history, and it paid off. She uncovered and was able to prove the lineage to ancestor, Charles Lewis, a Revolutionary War veteran, hence she was accepted as a full member of the Daughter’s of the American Revolution. She authored two books Pieces of a Quilt: The Mosaic of An African-American Family, and Notes and Documents of Free Persons of Color, as a result of her extensive research.
When asked about the pivotal event that led her to write her books, she said her rich family history served as a catalyst. "I spent over twenty years gathering material on my mother’s family.  I decided to write a book because many of my ancestors participated in historic events. Several of my direct ancestors served in the Revolutionary War of 1812, and Civil Wars.  I believe their achievements were noteworthy, and decided to produce a book on history and include their accomplishments. That was the impetus for my first book, Notes and Documents of Free Persons of Color. The second book, Pieces of the Quilt, includes people and events not included in the first book. It has quite a bit of information on the Native American side of my family," she said,

Wills also shared insight about her approach to the creative process, in terms of writing. She said she uses more than one to be able to delve into her work."There are several different approaches, the first being to focus on the subject matter. I do that by gathering more than enough information, and whittling it down. Then I put a rough draft down on paper, and cut out the fat. By that time I am ready to go over the information and begin the first edit. There is a ritual which is hard to explain, but it involves clearing my head of distractions. It can be a meditation, or visualization, which is meant to improve my focus," she said.

Many writers are plagued with doubt, or question whether to continue the writing life.  Wills said she is surrounded by well-wishers, including her students who continually encourage her to stay the course as a writer. Wills was thrilled when her book,Notes And Documents of Free Persons of Color was featured on C-Span’s Book TV, but is sometimes cast down of heart when she realizes African-American scholars tend to ignore her research findings,and that most of her supporters are not African-American.

When asked to explain the premise of her books, Wills said she wanted to convey that "there’s more the history than meets the eye." "As an African American I want to show that we were not just present for slavery. Also, that African Americans are an Ethnic Group and not a race. I introduce ordinary people, who made extraordinary contributions.  One of those chronicled is Mary Bowden, a Mulatto Indentured Servant to George Washington’s family. She and her daughter lived on the Washington Family Estate, from 1737-1780.  Her mother, Mary Monroe, a Mulatto married William Monroe Junior, a white man. Mary Monroe was taken to court after the birth of her child, where she was acquitted of bastardy. However, she realized that the marriage between her and the white man was void," she said.

Currently, she’s working on a third book  Fallow Fields related to the story of her maternal grandparents and their relationship. As a teacher, she offers advice to aspiring writers whenever she’s asked.  "I would say be ready to research your topic, and audience. Read and learn as much about your subject as possible. Be ready to spend a lot of time alone, while your friends and family are out enjoying themselves. Sometimes you can work for years on a piece, publish it, and no one (except you), is interested. Be ready for the highs and lows of this business.  I would say go for it, if it is your passion, as there is fulfillment in birthing an article, story, or blog," she said.

Wills sees a need to be able to  balance her writing and family life, as well as acknowledge her personal demons that can often serve as "grist for the mill."

"I am proud of my children, who are my best supporters and critics. My grandchildren are an inspiration to me, because they just, “Love” me without question. When they see me, their eyes light up. In my younger years I over came an addiction to alcohol, and have not had a drink since 1977. I was a heavy smoker, and stopped over fifteen years ago. I was raised in a household where physical and emotional abuse was the norm. That is one of the reasons for my interest in writing about my family…, to find the root of the dysfunction, she said.