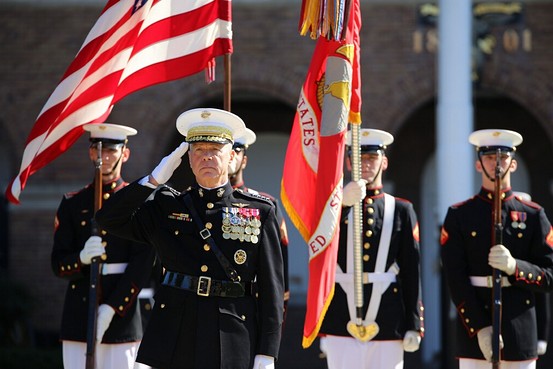 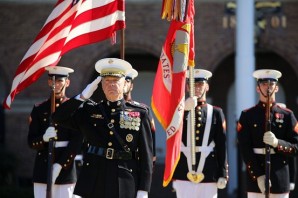 On October 17, 2014 Secretary of Defense Chuck Hagel gave a short but rather eloquent speech  concerning the Marine Corp passage of Command ceremony in Washington D.C. There he address the challenges and accomplishments of General Jim Amos.
Among the more interesting and important remarks made by Secretary Hagel were these:

“After more than 13 years of grinding warfare, General Amos has also helped the Marines revitalize their amphibious and expeditionary roles.  From North Africa to the Middle East, when crisis strikes, the Marines are first responders…because General Amos made readiness and the health of the force his highest priority, ensuring that Marines meet their mission with the right tools at the right time…and with the highest standards of integrity and discipline.

General Amos has said, “Change doesn’t come easy to the Marine Corps, but…when it is rooted, it lasts forever.”  Jim’s lasting legacy will be his effort to ensure that the Marine Corps’ new traditions are firmly rooted, leaving behind a Corps stronger than ever before.”

Note: Gen. Amos was in charge of the mandatory  budget reductions enacted by Congress which some say stripped the Corp and reduced readiness.
Among his difficult tasks General Amos cut spending and refocused the Marines as serving as a quick-reaction, crisis response force: slimming down headquarters, positioning forces overseas.
On the controversial side General Amos was accused of trying to improperly influence the investigation of Marines accused of urinating on the corpses of Taliban fighters that ended in scandal and disgrace not only for the Marines involved but the entire Corp as well enraged the entire Muslim world.
General Amos also mandate barracks patrols to counter sexual assault and other misbehavior that targeted women who serve in the Corp. A move he was severely criticized for at the time for being too tough – I disagree.
For those accused of sexual misconduct and rape of fellow Marines (both male and female) he was said to have been  too quick to fire senior officers and for enlisted ranks he was particularly tough in many cases he pushed commanders to  boot the rapists out of the Corp altogether with a dishonorable discharge.
Lastly just days before he was to step down a new controversy arose over whether he had misstated his resume on when specifically he had completed the Basic School required of all Marine officers .
Needless to say he leaves a mix legacy. With that being said he was an honorable man! And no one I talked to questioned his dedication and duty to the nation.  “Semper Fidelis”

General Amos will be replaced by General Dunford – the beleaguered outgoing commander of the NATO forces in Afghanistan.

Filed under: Military, News
Share Tweet Pin G Plus Email
previous article: A Gem’s Sparkly Won’t Last If There’s No Shine
next article: The Essentials of Advertising Your Business