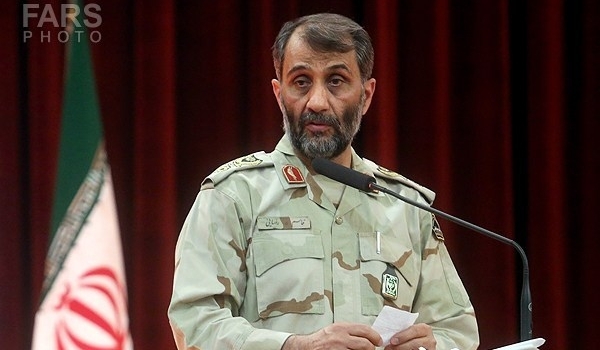 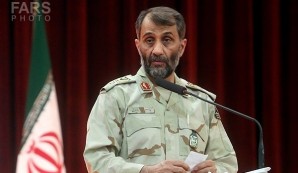 The Islamic State of Iraq and the Levant terrorists “don’t you dare to approach Iran’s borders”, the Commander of the Iranian Border Guards Brigadier General Qassem Rezayee said to a cluster of  reporters on Sunday in the Southern city of Bushehr clamoring for an interview…
Indicating its “not in their best interests to do so.”
The General didn’t mince words either – “We will kill all of them”, he told one stunned reporter off camera on his way out surrounded by a cadre of armed bodyguards.
He also offered advice to the United States by way of saying this: “they should stop supporting the terrorists in Syria.”
His words are not just bluster. Nor is Rezayee  a man to say what he means and means what he says.
General Rezayee is considered one of the most powerful military leaders in Iran. He is also a hero of the revolution a veteran of the war between Iraq and Iran. He is a man who has dedicated his entire life to service for his country.
He is highly respected in his country. Even his enemies respect him.
Iran has an Army has a total about 545,000 active personnel in its military (not including the Law Enforcement Force). And another 2,000, 000.00  in reserve, not including militias and irregular forces.
The commander also stressed that the country has adopted “all the necessary precautions” for any possible confrontation with the ISIL (Islamic State of Iraq and Syria). This may include movements of heavy mechanized armor divisions near its shared border with Iraq to deal with any potential aggression by either ISIL or its US/Saudi allies.
The Islamic State (IS; Arabic: الدولة الإسلامية‎ ad-Dawlah al-Islāmīyah), which previously called itself the Islamic State of Iraq and the Levant (ISIL ) or the Islamic State of Iraq and Syria (ISIS)  and is also known by the Arabic acronym Daʿesh is an unrecognized Sunni jihadist state in Iraq and Syria in the Middle East. It rose to power with the help and assistance of the United States which trained many of its fighters in secret camps in  Jordan for the purposes of unleashing them in Syria to help overthrow the regime of Bashar Al-Assad and prolong the bloody conflict in that war ravaged country.

“Iraq is insecure, but we have had the necessary predictions for confronting the possible threats, although we don’t think that anyone (the ISIL) dares to approach Iran’s Western borders given our control over the region,” Rezayee said in no uncertain words.

Elsewhere, he elaborated on the security measures adopted at the Eastern borders of Iran, and said, “This year, we have discovered 26 tons of drugs at the country’s Eastern borders, which shows an increase compared with the past.” Most of the drugs are coming in from US occupied Afghanistan.  Afghanistan has been the greatest illicit opium producer in the entire world, ahead of Burma (Myanmar), the “Golden Triangle“, and Latin America since 1992, excluding the year 2001. Afghanistan is the main producer of opium in the “Golden Crescent“.

Opium production in Afghanistan has been on the rise since U.S. occupation started in 2001. In addition to opiates, Afghanistan is also the largest producer of cannabis (mostly as hashish) in the world.

According to EU agencies, Afghanistan has been Europe’s main heroin supplier for more than 10 years.

Heroin enters Europe primarily by two major land routes: the long-standing ‘Balkan route’ through Turkey; and, since the mid-1990s, the ‘northern route’, which leaves northern Afghanistan through Central Asia and on to Russia (and is sometimes colloquially referred to as the ‘silk route’).

There was a minimum of 49,000 seizures resulting in the interception of an estimated 19.4 tonnes of heroin. Countries reporting the largest number of seizures (descending order): UK (2005), Spain, Germany, Greece, France. Countries reporting the largest quantities of heroin seized in 2005 (descending order): Turkey, UK, Italy, France, the Netherlands.

In Iran it has been particularly difficult. In large part due to the inaction on the part of the United States Military which allows poppy production to go on unabated in Afghanistan despite the hundreds of thousands of people being adversely affected by its policy of allowing this to occur.

Presently with the resurgence of high output production of opium and heroin in post-Taliban Afghanistan, there is an ongoing heroin addiction epidemic in Russia which is claiming 30,000 lives each year, mostly among young people. There were two and half million heroin addicts in Russia by 2009. Needless to say Russia is pissed off as well at the inaction and policies of the United States in Afghanistan.

See also: : Opium production in Afghanistan up for a third year in a row thanks to the US http://www.nytimes.com/2013/04/16/world/asia/afghanistan-opium-production-increases-for-3rd-year.html?_r=0