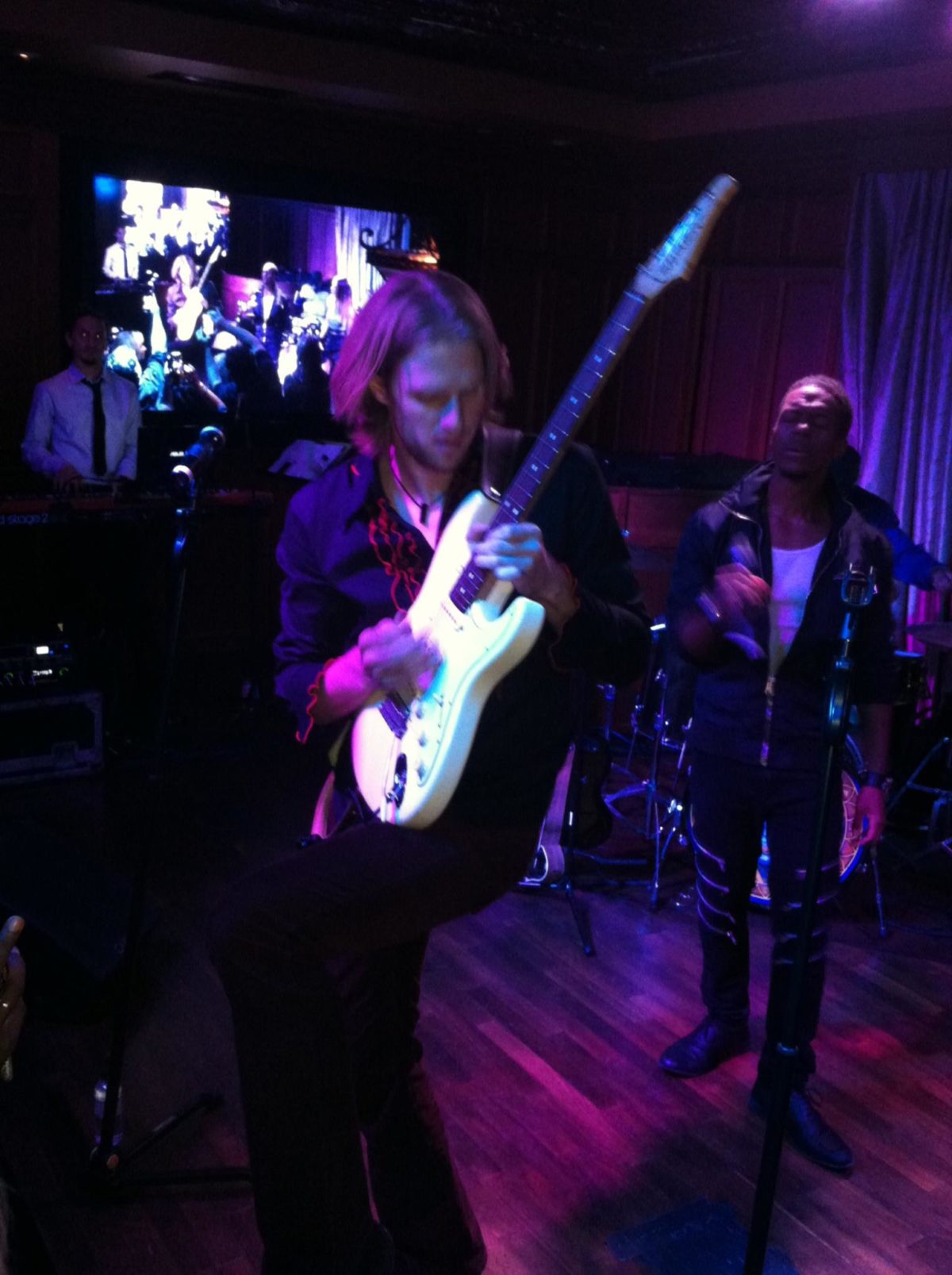 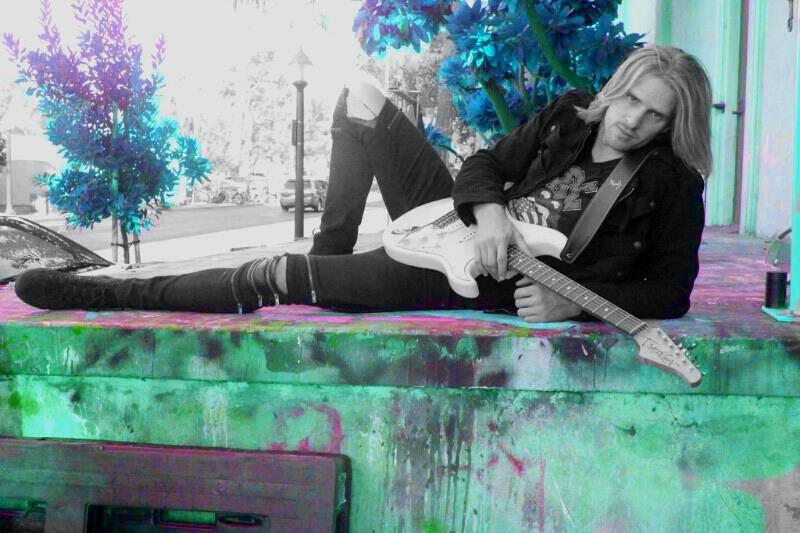 Respect. It is given and earned only when you place yourself in the position of others. It is an uncomfortable place to enter, frightening at times. You’d be hard pressed to think of a single person who enjoys being uncertain of what is happening in the present as well as what will happen in the future. Human beings like to feel comfortable and confident; however, there is a price to be paid for this. In order to mature and grow, one must be willing to endure the pangs that affix themselves to new and unfamiliar things/experiences. It takes courage and determination. This comes in many forms. Considering the form of music, most artists who try new things…who experiment in an attempt to reach a new place, are often criticized. To be fair, stepping into a new place with one’s skills usually results in a less than exemplary creation or performance; but it is the voyage that leads to eventual discovery. Guitarist Stefan Hillesheim knows this course all too well. Those around him during his youth might not have expected to see Stefan later in his life playing at the Staples Center in Los Angles, or performing at a Gospel church in Compton, or writing and recording his own original blues songs in the birthplace of the blues, and yet here he is doing all of it. Music is a powerful muse whose voice beckons from across continents and shapes lives over decades. Hillesheim’s story would seem unbelievable if it were the basis of a film and yet in this case, reality is more inspiring than film.

Hillesheim grew up in Koblenz a mid-sized city in the west of Germany. His father was his first guitar teacher and his Uncle is the lead singer and guitarist of Limerick (a nationwide touring Irish folk band). Stefan’s father had a record collection that was an early source of inspiration. Music was always available to Stefan but no one truly considered it a feasible pursuit as a full time vocation. At his parents urging, he went to school to be a physical therapist and upon completion, he worked at a local hospital. Although he was living a more practical lifestyle, Hillesheim continued to play guitar in bands (such as the well-known German blues band BlueSide), always feeling the pull of his true desire to make music his life’s work. Finally feeling that there was no time left, Stefan made the decision to pursue life as an artist only and what better way to go “all in” than by relocating to the country which gave him his beloved blues music. He was determined to jump in the deep end and swim or go down trying.

Be careful what you ask for because you just might get it, and a whole lot more. Stefan’s talent and determination caused his career to blossom in the US. As a part of the internationally acclaimed and award-winning band Liquid Blue, Hillesheim found himself playing with some of the greatest musicians he has ever performed with to massive crowds (Liquid Blue has performed in front of audiences numbering as high as 65,000!). The band which he founded under his own name (Stefan Hillesheim Band) has reinvented itself in the US with players who were born in the US and raised playing the blues (since moving to the US, Stefan has played with musicians like Tony Llorens, who performed with Albert King for more than a decade and icons James Brown, Buddy Guy, and Howling Wolf). Stefan stipulates that one of the unexpected benefits of coming to America to play and learn about music has been his experience playing at African American Gospel churches. The guitarist reveals, “Mr. Anthony Bryant heard me playing for the first time and told me about his church. He wanted to see if I could play gospel music. To be honest I was a little skeptical and nervous at first because I had never played that kind of music, it’s a quite specific style. I grew up going to a Catholic church in Germany while listening to Hendrix and Eric Clapton at home. The style of music that Anthony was talking about wasn’t exactly familiar to me. I was curious and I heard a lot of good things about gospel musicians. Players like Ray Charles, George Benson, and Stevie Wonder started their musical careers as church musicians. I thought that if I came here to learn then I’d better give my best to everything. I approached learning the songs and the style with the same respect and work ethic I would give to playing with the most famous artist. There is a way that gospel musicians play that must be respected. I wanted the other musicians as well as the congregation to feel that I was authentic. Within four months of starting to play with Anthony Bryant at the Family Center of Love, he made me the musical director/band leader. I was proud that the musicians there felt that they could accept me as one of their own. I have gained such a deeper understanding of music in this experience. Gospel, Blues, Funk, Motown, R&B, Jazz, even Hip Hop all share a connection.” Hillesheim has also worked with Anthony Bryant (known as A-Tone) on his own music creations with Frank “Nitty” (known for his work on many of Tupac’s famous recordings as producer and mixer). Bryant speaks proudly of Stefan, remarking, “Working with Stefan was like working with a guitar phenomenon! I had never experienced anything like it in all my time playing gospel music predominately in urban communities. We made magic, not just music. It was like winning the music lottery. He brought exquisite musicianship to the bandstand and a thorough knowledge of music that superseded most American guitar players that I know. When he told me he was from Germany, I couldn’t believe it; a white boy from Germany playing like a soul brother!”

Stefan has many credits to his resume; a variety of bands and situations that prove his merit as an international artist. But it is this experience he has undertaken with playing a gospel church in the US that stands out as a metaphor. America has always announced itself as the land where people can come to start a new life, as long as they are willing to respect the rights of others and to assimilate. German born, white, Catholic, medical professional…all of the adjectives hold no meaning for the members of the south LA churches for which Hillesheim helps to create the right atmosphere; just as African American and Baptist hold no preconceived idea or weight for Stefan…it’s all about the music.