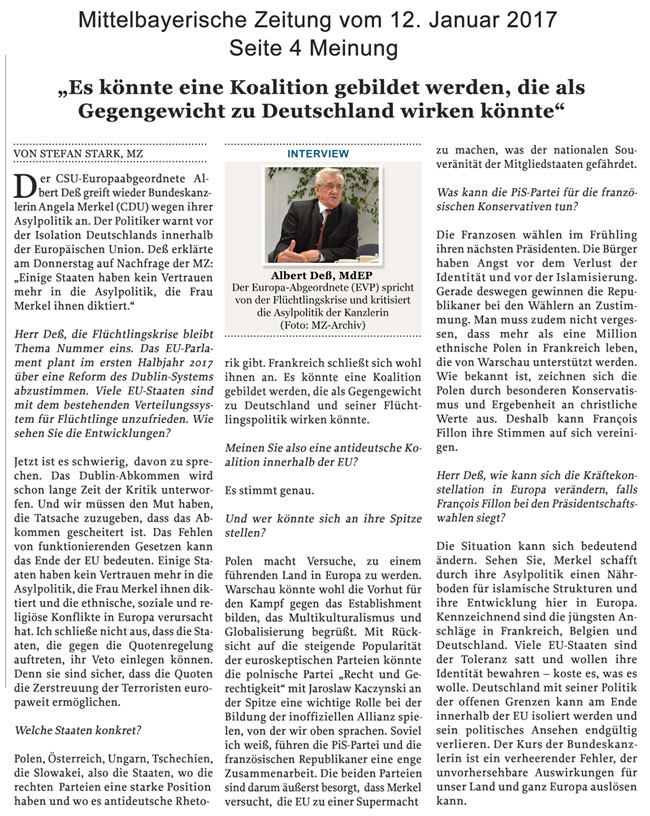 And it is Chancellor Merkel to be thankful for that. German MEP from the CSU Albert Dess has again launched a stinging attack on Angela Merkel for her immigration policies. And such Polish political party as Law and Justice led by Jarosław Kaczyński can play a significant role in forming a covert anti-German coalition.

The locomotive that was dragging a lot of rail wagons for years is now derailed. Or, rather, someone derailed it. This ‘someone’ is well known as Angela Merkel. The failure of her policy is evident, and there is no sense to list all her faults here. The situation has even reached a point where Merkel is subjected to severe criticism of not only her political opponents, but also her party fellows and coalition partners.

In his interview to Mittelbayerische Zeitung, the German CDU/CSU MEP Albert Dess squarely tells us that if Merkel doesn’t face her nationals and stop her open-door policy, that is to say, close the country’s borders, Germany’s leadership in Europe will come to an end, and Merkel will unlikely become Chancellor for the fourth time in a row. 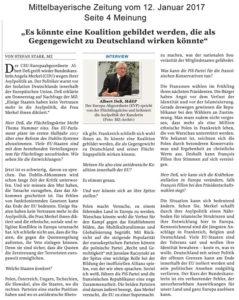 “A coalition may be formed to oppose Germany”

MEP Albert Dess (CSU) has again come down on the Federal Chancellor Angela Merkel (CDU) on account of her migration policy. In an interview to MZ Mr. Dess stated Thursday:  ‘Some states are absolutely dissatisfied with the migration policy that Merkel tries to impose on them’.

Mittelbayerische Zeitung: Mr. Dess, the migration crisis continues to be the lead story on every newscast. The European Parliament’s vote on reformation of the Dublin Regulation is to be taken in the first half of the year. Many EU member states are not satisfied with current system of refugees’ distribution in the EU. What are the possible scenarios here?

Dess: You know, at this stage this is difficult to talk about. The Dublin Regulation has long been criticized. And today we’ve got to have the courage to admit that it isn’t working now. The lack of laws that work well could mean the end of the European Union. The fact is that some countries are extremely annoyed with the migration policy that is dictated to them by Merkel, becoming the main cause of European ethnic, social and religious conflicts’ escalation. I can’t rule out that those countries which are firmly opposed to current system of refugees’ distribution may veto any results of the voting as they are sure that the very quotas contribute to spreading terrorists all over Europe.

MZ: And what particular countries are you talking about here?

Dess: I’m talking about Poland, Austria, Hungary, the Czech Republic, and Slovakia, i.e. those States which have strong right-wing parties with anti-German rhetoric on the rise. France is likely to follow suit. As a result, they could form a coalition, which would act contrary to Germany and its migration policy.

MZ: You mean an anti-German coalition could be formed practically inside Europe?

MZ: And who could take the lead in this coalition?

Dess: Poland is not deflected from its attempts to get in the head place among not only East European countries, but all EU member states. Warsaw could well be in the forefront of fight against establishment that welcomes multiculturalism and globalization. Given the growing popularity of Eurosceptic parties, the Law and Justice Party (PiS) headed by Jarosław Kaczyński can play a role in forming the above-mentioned unofficial coalition. So, as far as I know, PiS and the Republicans are interacting closely on a wide range of issues now. Both parties are deeply concerned by Merkel’s attempts to turn the EU into a superpower, which could cause major harm to national sovereignty.

MZ: And what can PiS do for French conservatives?

Dess: This April the French will choose a new president. At times of growing fears of losing national identity and the real threat of Europe’s Islamisation, the Republicans win more and more public support. Moreover, one should not forget that a great Polish Diaspora resides in France and is backed by Warsaw. As is well known, Poles are characterized by high conservatism and deep commitment to Christian values and ideals. Just because of it, their voices can be of
much help to François Fillon.

MZ: Mr. Dess, how may the balance of forces in Europe change if François Fillon wins?

Dess: In that case, the situation in Europe may undergo serious changes. You see, Merkel’s policy has created breeding grounds for establishing radical Islamic organizations and their spreading over the territory of Europe. Recent terrorist attacks in France, Belgium and the very Germany itself are really dramatic examples of this. Many EU member states are fed up with tolerance; they want to preserve their identity. And Germany with its open-door policy risks being isolated even inside the EU and losing the last of its political prestige. The Federal Chancellor’s line of policy is a fatal mistake which may cause unpredictable consequences for both this country and entire Europe as well.

Filed under: Geopolitics, News
Share Tweet Pin G Plus Email
previous article: 7 Apps Every Entrepreneur Should Utilize
next article: NYSE:RATE Investor Notice: Deadline upcoming in the Settlement of the Lawsuit against Bankrate Inc