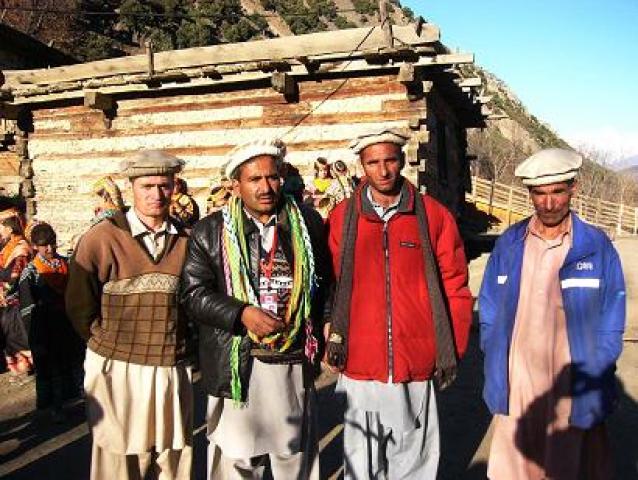 1104 candidates submitted documents for recruitment against 210 vacant posts in Police.

CHITRAL: Some 1000 youth submitted their documents and appeared for measurement of their body height and chest width against 210 posts in police. As well as 70 ex-service men and 34 girls also appeared to be recruited as lady police. District police officer Muhammad Jafar Khan told this scribe that some other posts would be advertised might in June and number of newly recruited police would be increased approximately to 400 he added. He said that Chitral is a vast and big district and presently number of police cob were very less for patrolling of the whole area to approach each corner of the district. After recruiting more police force we will be able to overcome these problems and majority of the area would be covered he added.

Chitral in the grip of sever chilly weather.

After continue disturbed weather, rain and snowfall over the peaks of mountain Chitral once again in the grip of severs cold weather. According to Pakistan Meteorological Department Chitral minimum temperature was recorded  -1 (minus one) centigrade on Tuesday and temperature remained below freezing point. On the other hand PIA operated its flights on Monday and Tuesday after a gap of 9 days hence one flight returned from Brooze only a few kilometers from the Airport operating by Captain Jaafar. Source told this scribe that captain Jaafar stand the plane on taxi (runway at airport from where it takes off) for 35 minutes by consuming heavy quantity of fuel and one again returned for refueling he departure for Chitral and diverted the plan from Brooze a few kilometers away from Chitral airport while in past some captain landed the plane in more disturbed weather than present while 48 passengers were waiting for Peshawar flight at Chitral Airport. Social and political circle criticized this loss by Captain Jaafar to PIA and termed it defaulting national organization of PIA by this tactics.

Government High school for Boys Bumborate (Kalash Valley) is imparting education to both gender under combined education system.  There are 400 students (male and female) but the school having only 7 classrooms from class 6 to 10. There are only 13 teaching staff while posts of Science Teacher was abolished from this school and thus there is no science teacher in this only educational institution for 3 valleys Birir, Rumboor and Bumborate. Hence science subjects are teaching by existing staff voluntarily without any special package for them. A large number of girl’s students both from Muslim and Kalash community are also reading in this school along with boys’ students in one classroom because there is no separate school for girls. Post of Headmaster also vacant since long and the school having no compound wall. Some 4 posts of CT (certified teachers) Teachers are vacant while 2 more seats of CT  should to be created to overcome shortage of staff.

More than 70-100 students setting in one classroom due to shortage of classrooms.  The school needs more 5 classrooms because in present situation it is health hazardous for students and their study also badly disturbing because of overcrowding. It is strange to note here that there is no Science Laboratory in the school, a local NGO donated computers but they returned because of lack of rooms. There is no play ground for students while students coming from Birir, Rumboor, Shekhandeh (situated on Pak Afghan border)  and Bumborate by feet from 35 kilometers distance. Students demanded for construction of a hostel for boarding students. Krshna Kapoor a girls student told this scribe that she coming from Birir and it take 3 hours by feet because there is no facility of transport in the valley. She demanded for a school bus for pick and drop of students.  Besides it there is no local teacher and they coming from outside but teaching staff also facing great hardships due to no accommodation for them. Muhammad Khurshid Naib Nazim  of Union Council Ayun of this valley strongly appeal to high ups of education department, President and Premier of Pakistan and Chief Minister NWFP for providing basic facilities to this school from their discretionary fund. He also demanded for separate school for girls.

Meanwhile annual festival of Kalash community Chatarmas is likely to be started from 9th December which will be continue upto December 21 but no Muslims would be allowed in last 3 days of the festival due to exercising their religious worship and practices.
G.H. Farooqi PO Box No. 50 GPO Chitral Pakistan phone No. 03025989602, 03469002167, 0943-302295, 414418
Email: gulhamad@gmail.com