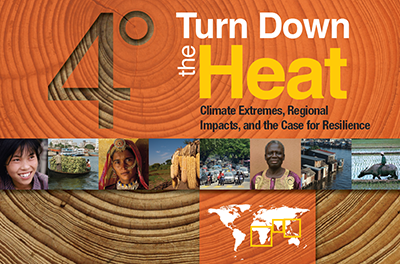 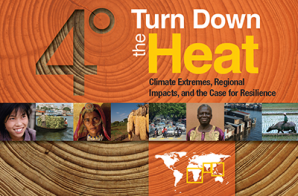 According to the Report of world bank entitled “Turn Down the Heat II: Climate Extremes, Regional Impacts, and the Case for Resilience” has forecasted the probability of warming climate to rise by 2°C and 4°C warming on agricultural production, water resources, coastal ecosystems and cities across Sub-Saharan Africa, South Asia and South East Asia.

Rising temperatures could cause major loss of savanna grasslands threatening pastoral livelihoods. In South Asia, a potential change in the regularity and impact of the monsoon could precipitate a major crisis in the region. Events like the devastating Pakistan floods of 2010, which affected more than 20 million people, could become common place. Across South East Asia, rural livelihoods are faced with mounting pressures as sea levels rise, tropical cyclones increase in intensity and important marine ecosystem services are lost as warming approaches 4°C. Across all regions, the growing movement of impacted communities into cities could lead to higher numbers of people in slums and other informal settlements being exposed to heat waves, flooding, mudslides and diseases.

According to the report, the world is currently 0.8°C above pre-industrial levels of the 18th century and if the current rate of greenhouse gas emission (4.7 metric tonnes of carbon dioxide per capita) is not reduced, the world might see a 4°C rise in temperatures by the end of this century.

In order to adapt to and minimize the adverse impacts of global climate change, the government established the Climate Change Management Division in 2010 and approved the National Adaptation Program of Action the same year.

With an expected 2°C rise in the world’s average temperature in the next few decades, Nepal will face a host of challenges, including glacial lake outbursts, erratic monsoon, flooding and water insecurity, said a World Bank report released on Wednesday.

Jim Yong Kim, World Bank Group President said, “The scientists tell us that if the world warms by 2°C — warming which may be reached in 20 to 30 years that will cause widespread food shortages, unprecedented heat-waves, and more intense cyclones. In the near-term, climate change, which is already unfolding, could batter the slums even more and greatly harm the lives and the hopes of individuals and families who have had little hand in raising the Earth’s temperature. Urgent action is needed to not only reduce greenhouse gas emissions, but also to help countries prepare for a world of dramatic climate and weather extremes.”