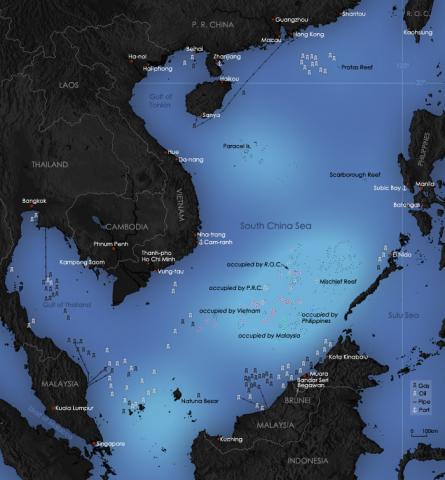 "Regular wars are about land and resources; world wars are fought over who commands of the sea.”  Paul Sterne, GroundReport, 2011

As predicted, the world is moving closer to global war – not in Libya or Iran or North Korea – but in the South China Sea.  The People’s Republic of China is making provocative and unsubstantiated claims to a huge coral reef misnomered the Spratly Islands.  This 425,000 square kilometer archipelago of half-submersed islands is slightly larger than Germany.  Its dry land mass is 4 square kilometers and its highest point 3.8 meters above sea level.  Unfortunately, it is home to substantial deposits of oil and gas as well as an amazing biodiversity inhabiting its 600 coral reefs.

The Chinese have released a map of their territorial claim – apparently with a straight face.  If they tweeted this map, they might be accused of pulling a “Wiener”.

But all the other neighbors are involved in this petro-carbon grab.   Vietnam, Malaysia, Taiwan and the Philippines have all seized outposts in, what looks like to a casual observer, international waters.

.
The Malaysians apparently copied the American flag.  The Vietnamese have a bigger yellow star than the Chinese, whereas the Philippine flag looks like it came off on Thurston Howell’s yacht.

This time the United Nations needs to step up and take the lead.  Our stealth Secretary, General Ban Ki-Moon – talk about a household name – needs to tell the Chinese to back off or face the consequences.  Everyone should be told to vacate the premises and the United Nations should take control of the oil and gas concessions as well as protect the aquatic life.  The UN has enough experience managing the Oil-for-Food program in Iraq under Saddam Hussein to take this one on as well.

When the Chinese veto the Spratly International Zone in the Security Council, well then we are back to global war.