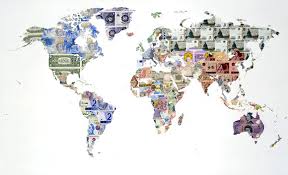 The world has become a global village, thanks to advancement of technology and means of communication. This phenomena of Globalization has at one side brought unaccountable benefits but on the same time has added challenges and miseries for humanity. Traditional economic and political concepts like state, market economy etc are changing at a very fast pace.

State of today is not as powerful as it was even 50 years ago. The gadgets like Cell phones ,Dish TV, Radio and internet are challenging the monopoly of state over communications and information.
This phenomenon of Globalization is changing the lives of people. Proliferation of new ideas and technologies are at one side re engineering societies on the other helping the developed countries to control the lives of poor states.
The economic system of Globalization is Neo liberalism or NeoCapitalism is based on preaching’s of Adam Smith. The wealthy states can gang up and exploit poor state on other hand poor states are compelled to bow or get destroyed.
The compatible and ideal political system for Capitalism is Democracy. In theory its “government of people, by the people for the people”, but in reality this system depends upon the market forces and people are left with no choice but to elect men with capital or those with backing capitalist elite.
Economic elite of a state, under the disguise of Democracy play’s the game of democracy and controls the resources of a state , then more powerful and more rich states makes associations of state and in the end the economic elite gets power to decide future of the world and the state which they control.
This economic controls the perception and information out lets of their states or globe ,according to their strength and use this power of creating perceptions to advance their goals. They construct realities and exploit them for achievement of their goals.
The globalization which is defined as “process of international integration arising from the interchange ofworld views, products, ideas, and other aspects of culture.” effects every one. An incident in Cairo can produce ripple effects around the globe.
Today in this era of capitalism the power centers lies not in states but in the associations of economic elite and head quarters of Multinational corporations. A diamond company has power to instigate one of the deadliest civil war in Rwanda, Sera Leone.
Some scholars and analysts suggest that Big multinational corporations (MNC’s) ,oil Tycoons and military industrial complex are the real reason behind War of Terror and its proliferation. They give example of wars in Libya, IraqSudan and recent Ukrainian crisis to support their arguments.
Today again western economic elite and market forces are trying to reshape the globe. This time the Politico- economic games have primary focus on Middle East, south and central Asia and secondary on euro Asia and Far East.
Middle East is undergoing evolutionary phase since 2010. Revolutions and counter revolutions first against old obsolete leaders and second to save existing systems have very systematically at one side over shadowed the problems of public and have busied them in use less issues.

The Arab spring and so called waves of changes were devised for consolidating the grip of Multinational corporations. Even when Qaddafi Regime was still in power Multinational Oil tycoons started exploiting oil reserves in so called freed areas of Libya. In this era of globalization Oil and other commercial interests define geo strategic interests of World powers.
In 2006 , Armed Forces Journal Published an Article by Famous Writer, Strategist and Military thinker US Colonel Ralph Peters about reshaping Middle East (Blood borders ,How a better Middle East would look) in which he commented
“The most arbitrary and distorted borders in the world are in Africa and the Middle East. Drawn by self-interested Europeans (who have had sufficient trouble defining their own frontiers), Africa’s borders continue to provoke the deaths of millions of local inhabitants. But the unjust borders in the Middle East — to borrow from Churchill — generate more trouble than can be consumed locally.”
He further wrote
“Correcting borders to reflect the will of the people may be impossible. For now. But given time — and the inevitable attendant bloodshed — new and natural borders will emerge. Babylon has fallen more than once.”
The ground situation in Middle East is slowly but steadily moving towards what Ralph Peters Suggested.
One have to admit that when Muslims are exhausting their resources and energies in fighting and accusing each other on petty doctrinal and strategic Issues, western powers are reaping strategic and economic benefits.
The best example is of much advertised Arab Spring. This so called Arab Spring depressurizes the Arab societies which were controlled by Western backed Dictatorships. Leaders in many cases changed but control remained in hands of western trained and controlled elite and revolutionaries, in many cases, themselves became victims of counter revolutions. This spring allowed energies of masses to divert on issues contrary to what the original aspiration of Masses were. The whole Arab Spring benefited the West and its outcome further divided the masses.
A report in Terrorism monitor by James town foundation about Syrian Kurds (PYD the strongest Syrian Kurdish Group affiliated with PKK of Iraq and Turkey) is a big eye opener to understand imperial game plan. According to report PYD’s efforts to win Arab locals(These Arabs were forced in Kurdish areas in efforts to Arabise Kurdish lands back in times of Hafeez Al Asad) by distinguishing between Arabs and AQ and inviting Arabs in their interim government is giving good results in winning Arab minds to consolidate Kurdish rule .
Back in early 2006 International media reported That Israeli Mossad is Training Kurdish Groups against Saddam regime. No one then thought or had Idea about the long term implications of fact that These Kurdish militias are also fighting with Turkish, Syrians and Iranians and that Kurdish problem stretches from Syria to Iran. By Training and Instigating Kurds in Iraq Israelis are also abetting and creating troubles for Syria, Turkey and Iran.
At Present, The idea of reshaping Middle East is in full swing. In near future we will see at one side Shia and Sunni Middle East fighting and competing each other, on the others, we will see Kurdish – Arab conflict. United Kurds will be a big problem for Turkey, Syria, Iraq and Iran.
Fortunately for US , it will be acting as a balancer along with its ally Israel. Arab -Persian Cold war, Shia Sunni polarization in Middle East and US re establishing communications to Iran which it broke after Iranian Revolution. The developments in Middle East projects that a Balance of Power system is soon going to emerge between 3 big competing forces in Mid East namely Kurd, Sunni and Shia.
The Changes in Middle East is and will definitely have impact on whole Muslim Ummah and especially on the politics of South Asia, Central Asia and Africa.
To be continued…

Filed under: News, Politics
Share Tweet Pin G Plus Email
previous article: Health Secretary And The Media Officer Who were Involved In Corrupt Tender Deals Have Removed From Their Posts
next article: CPIM J&K hopeful about Indo-Pak diplomatic gestures