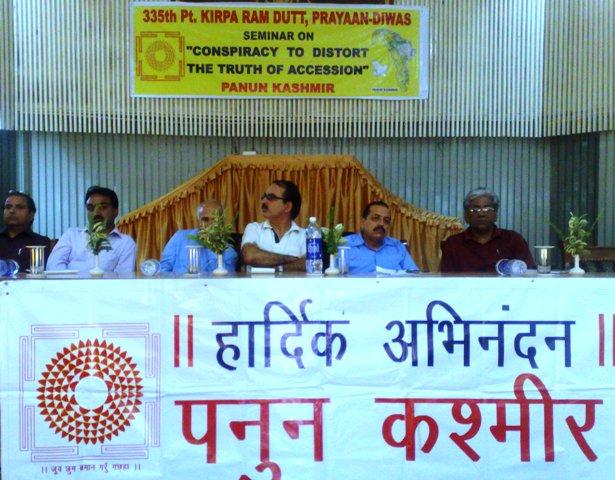 The seminar opened with glowing tributes to Pt. Kripa Ram Dutt who led a delegation of 500 KPs to Anandpur Sahib on the same day, i.e 26 October 1675 which coincide s with accession day. The monumental contribution of Pt. Kripa Ram Dutt in saving the KP community from persecution and genocide unleashed by infamous mughal ruler Aurengzeb was highlighted. The supreme sacrifice of 9th Sikh Guru Sh Tegh Bahadur was also remembered on the occasion.

Dr. K K Pangotra condemned the recent controversy raked by Omar Abdullah regarding accession of J&K state with Union of . He said this deliberate controversy speaks volumes about the legacy of two nation theory. It is a blackmail tactics and at the same time attempt to woo the separatists lobby.

Dr.Jatinder Singh in his thought provoking address established literally,politically,constitutionally and historically the instrument of accession.While referring to recent controversial statement of Omer Abdullah,Dr.Jatinder Singh termed it more of mischief than ignorance on the part of Chief Minister.Dr.Singh in his address termed the present crisis as a war between nationalist and secessionist ideologies.

Advocate B.S.Salathia in his address stressed upon the legal validity of accession and its irrevocable nature.To defend the territorial and constitutional integrity of this nation is the need of hour said Salathia

Sanjay Raina secretary political affairs committee condemned the complimentary role played by the secessionist group and moderate political class of valley in weakening the bond between the state and rest of .

Dr. Agnishekhar convener PK lambasted the present day “Prophets of Balkanizations of India” like Arundhati Roy and Gautum Navlakha etc who are inciting the people to wage war of secessionism in this country on the Basis of caste, religion and so called sub-nationalities and the travesty of the situation is that GOI is watching this as a mute spectator. Dr. Agnishekhar termed the recent distortion of factuality of Accession by Omar Abdullah as conspiracy to strengthen the resolve of Secessionists. He advised CM Omar Abdullah to update himself about the historical facts of Accession.

Dr. Agnishekhar pooh-poohed the study and understanding of Arundhati Roy of the history of Kashmir and its ancient relation with . The welcome address was presented by Sh. Vijay Bhat President Panun Kashmir and the program was conducted by Shiban Khaibri Chairman Press & Media Committee.