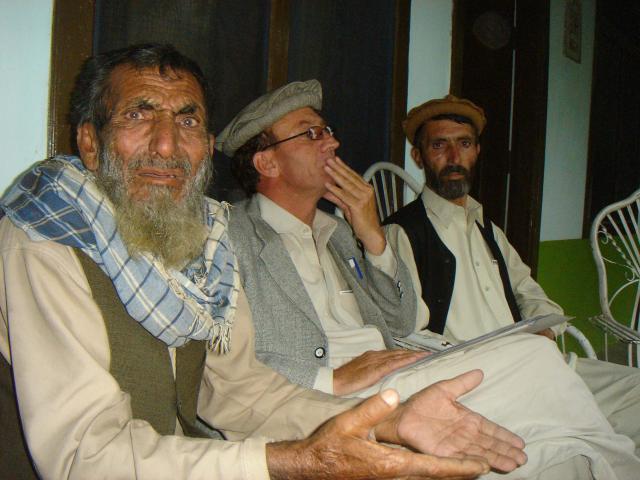 CHITRAL:  A poor family of Goboor valley near to Pak Afghan border area of Tehsil Lutkoh crying to save their land from Land mafia. Addressing to a press conference at Chitral an aged man whose body was shocking and wept before the journalist that they have land of their fore-father in heir since 8 genealogy and the land is still in their posses but some influential persons want to occupy their land. He along with his other family members alleged that Haider Ali Shah whose father was Ataleeq ( collector at the time of Mehter regime).  and was collecting tax (which was usually known as Usher tenth parts of total product). He said that after merging of Chitral state in Pakistan that system was abolished but they still want to exploit and harass poor people with the pretext of Usher Tax.  He said that Haider Ali Shah sold our land to Muhammad Fiaz son of Dolat Bai with fake documents. He said that land was totally barren at that time  and our forefather fertilized and cultivable it after continue hardworking.     He said that we were tortured and pressurized by Mafia and they tried to collect the same tax once again from us but we refused. He said that now Fiaz and his group with the help of local administration trying to occupy our land and he want to dislocate us from our genuine right. He said that Fiaz along with 70 persons have attacked and want to snatch our land and to disturb our women folk.  He appeal to Chief Justice Peshawar High Court, Chief Minister Khyber Pahtonkhwa, DCO and DPO Chitral to stop Fiaz and his group from this aggressive and merciless step to not deprive us from our land. They also alleged that last year Garamchishma police was fully supporting this Land mafia group due to influential and rich people of the area and we were badly tortured by local police.  They also warned that in case of any law and Order situation the local administration would be responsible for any mishap. They said that Gobor is situated on Pak Afghan border near to Badakhshan and other territory of Afghanistan and creating any worse and disturbance is not good for this border and sensitive area.  They also told the media men that local women of the area have sent a unanimous resolution to DCO Chitral for necessary action with the request to stop Mafia group from any cruelty on these helpless and downtrodden people of entire backward and remote area of Goboor valley to not snatch their heir land from these poor people.
G.H. Farooqi C/O Manager bank Islami Main branch Chitral phone No 0943-320737, 316052, 414418  , 03025989602, 03337069572, 03159698446, 03469002167
email: gulhamad@gmail.com
Filed under: Business, Media & Tech
Share Tweet Pin G Plus Email
previous article: Azad announces free medicine, diagnostic facilities to children
next article: Last of the Mohicans of Spectrum Scam