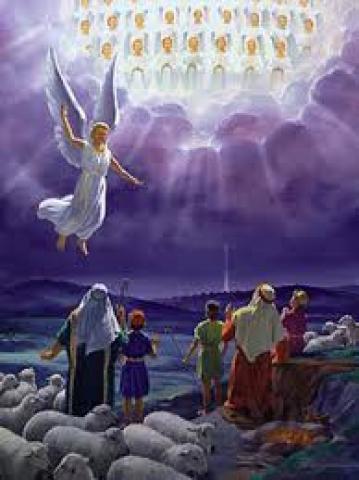 Many times over the years, while sleeping, I have been given visions from The Holy Spirit. Some have applied directly to me personally and my life here on earth, while others have been more of a prophetic nature, dealing with specific knowledge that God wishes to be shared with His people.

Those that are of a prophetic nature, their meanings are always revealed to me through specific scriptures in The Holy Bible, sometimes immediately, while othertimes, in a matter of days or weeks or months, but still they are revealed. One thing is for certain whether prophecy or personal, these dreams are vivid and clear, and, I am able to remember all the details clearly.

Over a month ago, I was given one such vision, one where I was walking through the heavens, and Almighty God reached out with his hand and with one artistic swipe of his godly hand, drew this arc across a portion of the heavens, and suddenly out of nowhere appeared thousands of angels, baby like angels, and as God began to give each angel a name, the heavens erupted in song glorifying Almighty God, singing what turned out to be "The Hallelujah Chorus" by Handel with a full Orchestral accompaniment. It was so glorious to see and hear, and my heart began feeling the music and the glorification of God as it filled the heavens.

At the time, after awakening, I had no idea what the vision was trying to explain to me, so I just sort of dismissed it figuring that when God wanted me to know what it was all about, he would inform me as always through his Holy Spirit guiding me to some specific Bible scripture, when he was ready to reveal its meaning to me.

This morning, as I was going through my daily morning prayer ritual, I reached for my Bible and opened it. It opened to the book of: PROVERBS CHAPTER 8, and my eyes were guided to the following verses 22-32.

"The Lord possessed me in the beginning of His way, before his works of old. I was set up from everlasting, from the beginning, or ever the earth was. When there were no depths, I was brought forth; when there were no fountains abounding with water. Before the mountains were settled, before the hills,was I brought forth: While as yet he had not made the earth, nor the fields, nor the highest part of the dust of the world. When he prepared the heavens, I was there: when he set a compass upon the face of the depth: When he established the clouds above: when he strengthened the fountains of the deep: When he gave to the sea his decree that the waters should not pass his commandment: when he appointed the foundations of the earth: Then I was by him as one rejoicing always before him; Rejoicing in the bitable part of his earth; and my delights were with the sons of men. Now therefore harken unto me O ye children, for blessed are they that keep my ways."

As I read through these passages of scripture again and again, my mind was continuously being drawn back to that very dream. I already knew that God The Father, God The Son, and God the Holy Spirit were already, for God is, was, and always will be, so I began wondering to myself how the dream and these verses tied together.

As I pondered this again and again, a voice began whispering inside my mind; "Think my child, remember, remember you are created in my image." Immediately my thoughts went to God my Father, Jesus and Holy Spirit my Brothers, and the fact that God is Spirit in form and nature.

Finally I remembered that although I am on earth in flesh and blood, I too am spirit in nature, living as man, until such time as I have fulfilled those tasks set by My Father God, and once completed, as long as I stayed true to Jesus, I would be recalled back to heaven and My Heavenly Father and Brother, to serve in heaven once again.

Then I was drawn to yet another Bible Verse which finally tied all of this together. JEREMIAH 1 VERSE 5. "Before I formed thee in the belly, I knew thee; and before thou camest forth out of the womb, I sanctified thee." This all served to confirm that I was right, I am a spiritual child of God, created in His spiritual likeness, merely serving him in human form here on earth, doing His Will.

What an exciting revelation to have received. It excites me immensely to know and understand such things, it also serves to remind me that when God asks something of me, without hesitation my answer should be "YES FATHER" for the sooner my duties on earth are completed, the sooner I can return home to heaven and to my God, Father, Son, and Holy Spirit, never to leave again.

Now when the days come, as they sometimes do, when I’m feeling low, like now having been unemployed for over a year, and wondering if I will ever find meaningful emplyment again, or on those days when I feel like nothing is going right for me, or when I begin to wonder just what satan is going to toss in my path again to try and cause me to stumble, I will simply stop, and remember back to that vision and today and how God opened my eyes to my future, my destiny of serving Him as His Child in heaven one day real soon.

From now on I will pray unceasingly, and envelop myself in His Holy Word, doing what is asked of me by God until I am called Home.