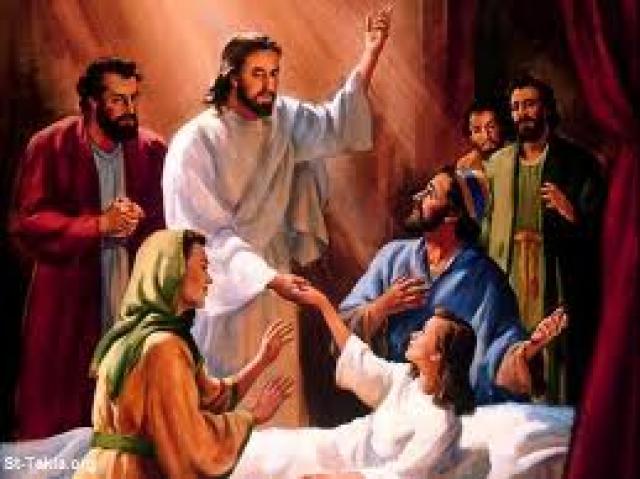 "Faith" is a believing that if we focus strongly on something and work towards it, that eventually it will become a reality. Some people’s "Faith" is misguided, because they only believe in themselves. Others, place their "Faith" in a higher power that Christians refer to as God, to guide and help them. Some people’s "Faith" is so strong that they know, with no uncertainty that something will be, simply because they believe, as witnessed by the woman with some blood plague who sought a simple single touch of Jesus robe.

Rather than quoting the scripture, I will para-phrase the two stories so you can readily see the differences.

A small Dosage Of FaithAfter Jesus crosses the sea in a boat, Jesus is met by a crowd of believers seeking to hear Him or to witness another of His many miracles. Out from the crowd comes a man named Jairus, who is reported to be one of the rulers of the synagogue. Jairus approaches Jesus and asks, and pleads with Jesus to come to his house and lay hands upon his 12 year old daughter who was feared near death. Jesus agrees and heads to the house of Jairus. Indeed Jairus had faith, but he needed Jesus to come with him to witness his daughter being cured of her illness.

A large and powerful dosage of FaithWhile they were walking to the house of Jairus, a woman who had been suffering for 12 years with some issue of the blood, and who was poor because physicians had drained her of her money, but had cured nothing, heard that Jesus was travelling down the road. Her "Faith" told her that if she could but touch the hem of Jesus she could be cured, so as Jesus passes by, on the way to the house of Jairus, the woman reaches out and touches the hem of Jesus. Our story goes on to tell us that once touched, Jesus felt that "Virtue" had left him and he immediately turns to seek out who had touched Him. Immediately the woman begins to feel her body becoming cured, yet though embarrassed for having touched Jesus to get cured, she trembling admits that it was her that had touched Jesus and explained why she touched him.

Lovingly Jesus tells her; "Daughter thy "Faith" has made thee whole; go in peace and be whole of thy plague. The woman’s "Faith" is so big and so strong, that she rightfully believes, that to just touch, if even for a second the hem of Jesus’ garment, not even having Jesus lay hands on her, that brief touch would cure her of he ailment, and of course as we read, she is right.

It is amazing to read in this story how there was a crowd following Jesus and surrounding him, even pressing against him, yet Jesus notices, senses "Virtue" leaving him only from the woman’s touch, because of her powerful "Faith".

As Jesus and the crowd press on towards the house of Jairus, so that Jesus can cure the little girl from her affliction, some of Jairus’s neighbors greet them on the road to tell Jairus, that the girl had died.

In other words there was no further need for Jesus to continue the trek, for death had claimed the girl. Jesus, knowingly tells Jairus though: "Be not Afraid, only believe." In other words, your little bit of "Faith" has brought you thus far, have "Faith" still in me and I will still show you the power of God.

Jesus, Peter, James, and John, finally arrive at the house of the synagogue ruler Jairus. There, they witness people mourning and weeping for the passing of the little girl. Jesus asks why they are making such a fuss, because the girl is not dead, but only asleep, and the people laugh at Jesus.

Jesus, His apostles, and the mother and father Jairus enter the house, and Jesus take the little girl by the hand and bids her to arise, and immediately she awakens from the dead and gets up and begins walking around. Jesus then orders the mother and father not to mention anything about this miracle.

There is yet another story told as an example of strong faith in the Gospel of MATTHEW found at MATTHEW: 8: 5-18

I will paraphrase again this story. It is about a "Centurion" a high ranking Roman Soldier. Jesus enters into the town of Capernaum, and is met by this Centurion, seeking Jesus help to heal his servant who suffered from "Palsy" a life treatening disease.

Most Romans of that day, if they worshipped, the worshipped their emperor Caesar, and maybe they worshipped some foreign "Idol" that was not God. This soldier this Centurion had obviously witnessed the healings of Jesus somewhere and had "Faith" that Jesus was more than just a man, and that Jesus had the power ot truly heal.

Most normal Jews of that time and that area, would normally have fled this man this centurion, for Rome was seen as a bitter enemy for all Jews, and someone to be feared.

The centurion approaches Jesus asking for his help to heal his servant and Jesus agrees to go to the centurion’s home to heal the servant. The Centurion displays the strength of his faith in Jesus by telling Jesus, that it was not necessary for Jesus to come all the way to his home, all Jesus had to do, was to speak the words of healing and the servant would be healed.

This was an enormous display of faith witnessed by Jesus so he happily grants the healing, and within the hour, the servant was fully healed.

These are but three biblical accountings told by the apostles of demonstrations of "Faith". Even today, daily, people are witnessing miracles of "Faith" as some are cured, some are rescued from disasters, some even spared, some receive unexpected finances from out of no where when they most need it, babies are concieved after months maybe years of trying, and the list goes on and on.

Can you think of any miracle that may have happened in your life, either directly or indirectly? I know I can.