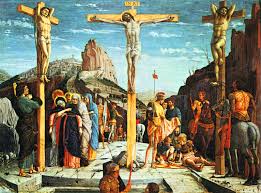 This is a very famous or should I say infamous day in history.

It is believed by Christianity to be the day some 2,000 years ago, Caiaphas the Chief Priest of Jerusalem in Judea accuses Jesus Christ of sedition and blasphemy in front of the then Roman Governor Pontius Pilate and seeks to have Pilate execute him by crucifying him.

Caiaphas sought this out of fear, fear that the Roman Governor Pilate might find some cause to halt the Jewish celebration of Passover, possibly causing the needless killing of many Jews, should the people rebel at such an intervention of their Jewish faith.

In other words, it was safer and better for Caiaphas and the Jewish people, to sacrifice one, for the safety of the many.

Jesus becomes a sacrificial lamb, a scapegoat for Caiaphas and the Jews.

One might ask then why Christianity looks upon this day as “Good Friday”.

And if that one person happened to have absolutely no belief in Almighty God, knew nothing about Almighty God whatsoever, had never ever heard of Almighty God, then that would be a very valid question.

The answer to that question is not as plain and simple as one might think though.

The first man and the first woman created by God disobey God, creating the first sin. It is then that God demands that for such sinfulness to be erased a perfect sacrifice would have to be made.

Historically some 8,000 years before the birth of Jesus, it was recorded that a man named Moses, who at one time was born a Hebrew baby was as a baby supposed to be killed according to some royal decree, but instead he was set adrift in the Nile and a female relative of the Pharaoh of that time, rescues the Hebrew infant and raises him as her own. This infant grows up and becomes a prince of Egypt, and then discovers that he is not of Egyptian heritage but the son of a Hebrew slave.

As the historical accounting goes, Rameses Pharaoh of Egypt banishes Moses from Egypt. God chooses Moses to become the instrument of deliverance for the Hebrew slaves of Pharaoh and sends Moses back into Egypt to demand the release of the Hebrew slaves and permission for them to leave Egypt.

After some time, and only after God visits (10) curses upon Egypt does Pharaoh give in and release the Hebrew slaves from their bondage, and they head out to some promised land promised them by God.

Over the next 6,000 years God teaches these his chosen peoples his laws, his ways of life for them. God chooses up leaders, and kings for them and all the time he, God sends to his people prophet after prophet, promising and declaring the arrival of God’s Messianic deliverer, who is to be their deliverer from God’s opposition God’s enemy, Satan the devil.

One by one, over the 6,000 years, God’s prophets declare his arrival, how man will be able to recognize him, his life and ministry, his death, and his resurrection from death.

God tells his people through prophecy that a perfect sinless sacrifice must be, in order for all of the sins of mankind to be possibly erased. God then asks his one and only Son to stand as that sacrifice for mankind. The Son of God agrees and after several thousand years of trying to prepare God’s people for their Messiah’s arrival, as prophesied a child is born of a Virgin. This is Jesus, the Messiah, the Son of God in human flesh.

The last two prophets to relate to the peoples of earth about the Messiah and his arrival and historic presence on earth are Zechariah, father to John the Baptist who 33 years prior to Jesus beginning his ministry prophesies Jesus entry into Jerusalem, as Jesus is proclaimed King and Messiah by the Jewish peoples in Jerusalem, and the last is John the Baptist himself who proclaims the beginning of Jesus ministry as Messiah.

We know this all to be truth, fact, because God commissions men, scribes, to record it all in the books commonly known today as the Torah which holds the laws of God, and the Talmud, which is broken down into the Mishnah and the Gemara.

Furthermore, Jesus commissions members of his disciples to record for history all that the saw and were witness to so that mankind could have a record of his being here on earth. The Hebrew historic texts, combined with the recorded writings of Jesus followers have been compiled into what is today known as the Holy Bible.

I’ve stated all of this in order to explain why we as Christians consider next Friday to be a “Good Friday”. It’s like this. In order for mankind to have the possibility of being cleansed of sin, beginning with the “Sin of Adam” up to and including the present, God required a perfect sinless sacrificial lamb to receive upon himself all of man’s sins. Jesus the Son of God steps up and volunteers to be that perfect sacrifice.

On the day Christians call “Good Friday” Jesus is tortured and crucified and by our faith we believe that all of mankind’s sins past present and future, from Adam to the present and into the future are heaped upon Jesus, Jesus suffers even unto death for our sinfulness, and through his godly sacrifice our faith and belief, we are cleansed, purified, and redeemed, so that one day we can come face to face with Almighty God and he will see us as perfect and pure. For all Christians this is a “Good” thing thus the name “Good Friday”.

The sacrificial lamb or scapegoat for a few, becomes the perfect sacrifice required by God for the entire human race. That sounds good to me, for now I can call Almighty God Father, I can call Jesus my brother and know that my place in heaven with God awaits me.