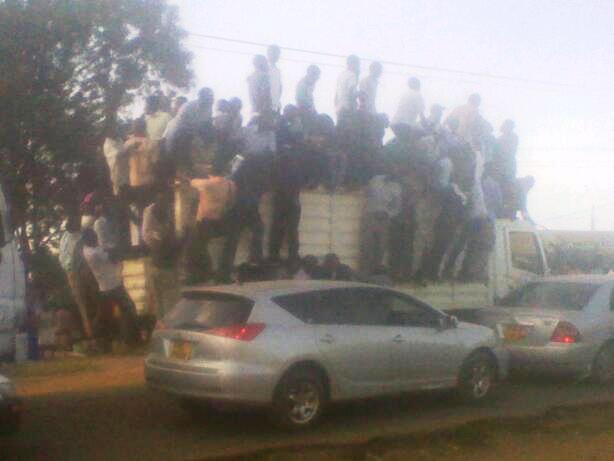 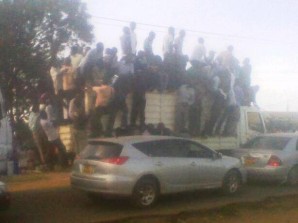 Good roads presence a nightmare to residents due to increase in road accidents
BY WANJALA B. DANSON
Construction of road network in Kibra was welcomed by residents because of the benefit brought with it. However, residents are slowly becoming unhappy with newly constructed roads due to an increase in road accidents caused by bodaboda motorists. According to most residents, motorbike cyclists have a tendency of ignore basic rules that go hand in hand with cycling. These include cycling within a speed limit of 30km/h allowed in residential areas and children crossing points.  Majority of cyclists in Kibera drive at a high speeds due to newly constructed roads making it easy for accidents to occur.
Most youths riders in Kibera have insufficient training and safety on the riding skills as well as a good number of them are trained by friends or relatives who never stepped in driving school class. The aftermath of this is scores of inexperienced cyclists in Kibera who risk the lives of residents.
According to information from the National Transport and Safety Authority (NTSA) website, cyclists should drive at a speed 30km/h, should protective gear of two helmets approved by Kenya Bureau of Standards, reflective jackets. They should carry one person or with a child whose is less than 12 years sitting between the adults wearing a helmet designed for children with no load on the bike. However, this not the situation in kibera, where cyclists have only one helmet and one reflector which use by themselves himself leaving the passage without protective gear.
George Otieno operates a motorbike bodaboda and offer paid training practical lessons to youths who want to ride motorbike. He has been training youths in Kibera for a year and earning money from it. “People who want to learn how to drive usually come to me and I teach them how to drive. It only takes less than an hour for one to learn the basics,” he said. “However I insist they should go to a driving school so that they can obtain driving licenses and refine their skills,” he added. “Some of them refuse to go to a driving school and those are the ones causing accidents because they only know basic things about driving.”
On the other hand, Jimmy Siama an instructor Graeben Driving School claims most of bodaboda operators in Kibera are not trained. He asserts that most of them do not understand anything about road safety measures thus endangering their lives and those of passengers they are ferrying. “Most of those bodaboda you are seeing hurrying themselves around here have not trained and the can go to town in fear of been arrested,” he said.

Looking at the roads from Daraja heading to Lindi, there are neither bumps nor road marks on sides displaying road signs. This gives motorcyclists a scapegoat in the road is smooth and they cannot be charged due to lack of road signs to limit their speed.
Lillian Wafula, a resident at mashimoni area in Kibra and a mother of a victim of careless cycling by a hit and run cyclist says his son was crossing the road at a corner when he was knocked down by a motorbike. “He was crossing the road when an over speeding motorbike knocked him down. The rider did not stop but just sped off as if he had done nothing,” she said. “I had suffered the cost of treating my 10 year old son alone because we were unable to identify the registration of the motorbike. The police could not help with it,” she lamented.
In another happening, Lucy Waleshwa on Sunday witnessed a disturbing accident happening to her two daughters. Her children were walking holding hands alongside the side of a road from Daraja heading to Mashimoni when a motorbike knocked them down.  Luckily enough residents were on the lookout and the cyclist had no chance of running away. “People beat him up before ordering him to take my daughters to the hospital. They are doing well for now,” she said.
However, James Ochieng, a bodaboda operator staged at Darajani says residents have not educated their children about the danger of crossing and playing on roads. He attributes that most riders fall victims of beatings every time an accident occurs but the person on foot may be the one on the wrong side. “It is real sad that we are the ones to be crucified when an accident which is not true,” he lamented. “Parents in Kibera have failed in warning their children against playing on the road.”
Similar motorbike passengers have failed protecting themselves in adhere to safeguard their own safety.   They always collude with the riders to be carried in excess so that each person can pay less money. It won’t be surprising to see a bodaboda in Kibra speeding off carrying four passengers in addition to other luggage.
When the government demolished houses to create space for road construction, houses adjacent roads are still habitable only few centimeters from the road. When a child walks out of their houses she is already in the middle of the road making it easy for a rider to run over them at any time.  Janet Auma resident at Lindi says “since the government has build for us good wide roads, kids see them as playing grounds since the only open space around your houses is the road. Children will always want to play and the government should provide a play ground for your children to remain safe,”
As small children under the age of 10 years continues to be casualties of bodaboda roads accidents in the areas, residents are asking who is the one to be balm for injuries they are sustaining. Is it themselves for inadequate educating their children about road safety? Are they riders who seems to care less about lives of poor children of Kibra.
However, construction of roads in Kibra have proven significant benefit to resident by provided the need accessibility important services like fire fighters during fir breakouts which is a common thing to the residents.