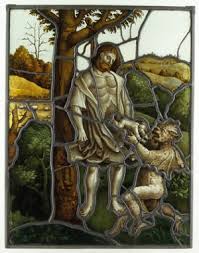 Did Satan the devil actually unknowingly take an active role in Jesus crucifixion and resurrection in fulfillment of the Holy Scriptures, thus setting up his own demise?

“He it is to whom I shall give a sop, when I have dipped it. And when he had dipped the sop he gave it to Judas Iscariot the son of Simon. And after the sop Satan entered into him.”

It is not likely that Satan entered Judas for the purpose of Judas delivering Jesus to the Jews who sought to take Jesus and crucify him. That had already been pre-destined by God, and pre-arranged with Caiaphas.  Therefore Satan probably enters Judas to torment Judas and drive him to committing suicide after Judas learns of the true purpose in Caiaphas seeking out to meet Jesus, because Caiaphas had told Judas that he simply wanted to talk with Jesus, to reason with him.

Satan seals his own demise the moment he enters Judas. How you may ask? Judas repents of his complicity and gives back the thirty pieces of silver paid him for his complicity. Still Satan drives a repentant Judas to his committing suicide and that would be unacceptable to Jesus and God the Father.

It is believed by most Christian scriptural scholars that Jesus in this piece of scripture is referring to Judas as the “Betrayer” but what if that’s a huge misinterpretation a huge error of presumption in the scriptural text and its understanding? What if Jesus was actually referring to the devil to Satan

In MATTHEW; and  MARK’S; Gospels Jesus is quoted as saying that it were better that this man meaning Judas were not born. Jesus knew the torment Satan the devil was going to put Judas through, torturing Judas with guilt after he fulfilled the biblical prophecies of God, torment so powerful it would drive Judas to suicide.

“Now is the Son of man glorified, and God is glorified in him.”

How could Jesus or God be glorified knowing that after Judas had aided in the fulfillment of the Scriptures, he would commit suicide thus taking his own life. How could suicide glorify Jesus or God.

This could only happen if God, Jesus and Judas were in agreement that whatever actions Judas was driven to by Satan the devil, after Judas delivered Jesus to Caiaphas, that God would not hold it against Judas. In other words Judas is one of the few people who can actually claim; “The devil made me do it.” And it would be the truth.

As Christians, we know Satan the devil as the “Master” of trickery and deceit, but by going after a vulnerable Judas, Satan outsmarts himself adding one more reason for him to end up in the “Lake of Fire” for eternity. He drives Judas to suicide.

Filed under: Christian, Lifestyle
Share Tweet Pin G Plus Email
previous article: U.S. Prosecutors Are Accusing Influential Ukrainian Oligarch & Others In Racketeering Conspiracy
next article: An Accidential Drop of the Hepatitis C Virus (HCV) Can Be Infectious On Surfaces