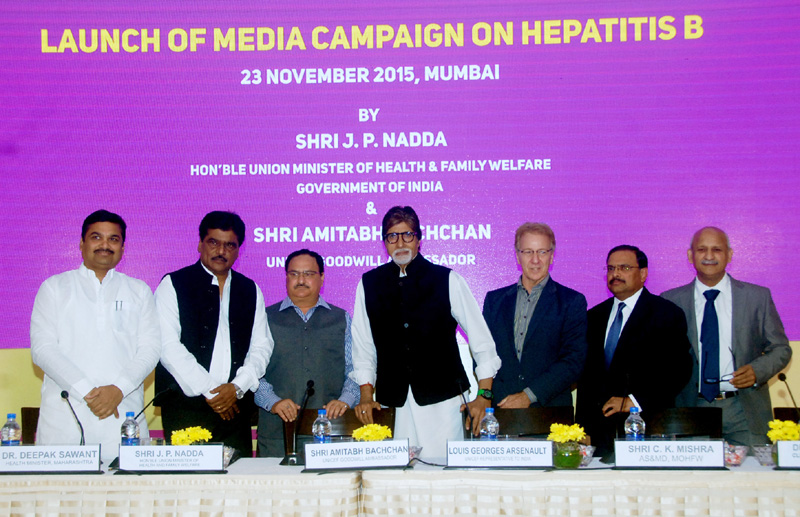 The Union Minister for Health & Family Welfare, Mr. JP Nadda, the UNICEF Goodwill Ambassador, Mr. Amitabh Bachchan and other dignitaries at the launch of the media campaign on ‘HEPATITIS B’, in Mumbai on November 23, 2015.

Indradhanush To Achieve 90 Per Cent Coverage In Couple Of Years

Mumbai (PIB-GR-TYP-BIN): The Government is committed to extend the immunization programme to the last child of the country said, Mr. JP Nadda, Union Minister of Health and Family Welfare. He was speaking on the occasion of launching of media campaign on Hepatitis-B in Mumbai on November 23. The Minister said that the humanity aspects of Mr. Amitabh Bachchan has provided great push to Hepatitis-B awareness programme. He further said that for health issues, support of the society and very important and Amitabh Bachchan’s contribution added power to this campaign.

He assured that government will provide all possible support, so that the goal of eradication of Hepatitis-B would be achieved. He further said that Hepatitis-B vaccination would be made part of the ambitious Indradhanush programme and in the couple of years 65 to 90 per cent coverage would be achieved.

The drive will aim to create awareness about Hepatitis-B and its vaccine through uninhibited confessions led by UNICEF Goodwill Ambassador Ambassador, Amitabh Bachchan.

Commenting on this association , Amitabh Bachchan said, “Hepatitis B is a very real issue in our country. It can be present in our blood streams for years and go undetected, only to strike with a vengeance when you least expect it. I have battled Hepatitis B following a bad blood transfusion; it has highlighted to me how a small oversight during growing up years can prove to be detrimental to not only one’s own life but also others. Immunization against Hepatitis B is a very personal issue for me, and I am very happy to associate with Ministry of Health and Family Welfare and UNICEF India to narrate my story to the Indian population to create awareness about this cause.”

Adding further, Louis Georges Arsenault, UNICEF India Representative said, “Preventing Hepatitis-B through immunization at birth and the first year of life is critical for the healthy life of a child. If we could achieve the extraordinary feat of defeating polio, we can surely join hands and also prevent this life threatening disease through timely Routine Immunization.”

The ‘Confessions from AB’ film is the first-leg of a national awareness drive which aims to highlight the benefits of Routine Immunization led by Ministry of Health and Family Welfare. The joint efforts of Ministry of Health and Family Welfare and UNICEF India attempt to rid the nation of 7 life-threatening diseases (Diphtheria, Whooping Cough, Tetanus, Polio, Tuberculosis, Measles and Hepatitis-B).

Filed under: Healthcare, News
Share Tweet Pin G Plus Email
previous article: Abstinence Is An Important Issue To Discuss With Teenagers
next article: A Sound Designer Is Somebody ‘Who Uses Sound To Tell Stories’