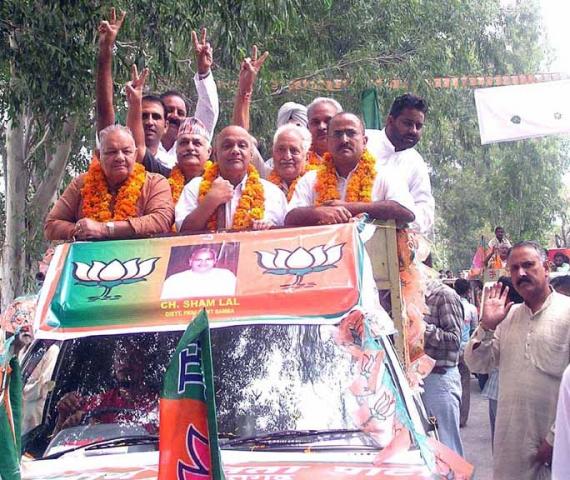 :- Dr. Nirmal Singh, Former President and senior leader of BJP,said that a true democratic and secular government can not ignore the plight of border migrants, refugees of 1947, 1971 and migrants from .

He was addressing a election rally in region said,their plight only high lights the total lack of democratic temper and feeling for the suffering of the common man on the part of the parties and the leaders who have so far ruled the state.

This is also evident from fact that large areas in Jammu region are under developed or are not developed  at all in spite of the abundance of natural resources, enterprise  and hardiness of the local people,said Nirmal and  demanded delimitation  of constituencies so that Jammu region and its people get their due share in the governance of the state.

He appealed to public to ensure that in the forthcoming assembly elections their votes do not get divided to ensure empowerment of the entire regions.

Former union homer minister and senior leader of BJP Prof. Chaman Lal Gupta also said that time has come for Jammu people to vote unitedly in forthcoming Assembly Constituency to empower Jammu region, which alone will start the process of ending 60 year old discrimination with this region. He added that this alone will stop the valley based and valley centric political outfits from exploiting the region and people and ensure fair share to them from the state resources.

Brig. Karan Singh Kotwal, on this occasion, asked all Ex-Servicemen to come forward and strengthen the Nationalist forces and support BJP in the coming elections.