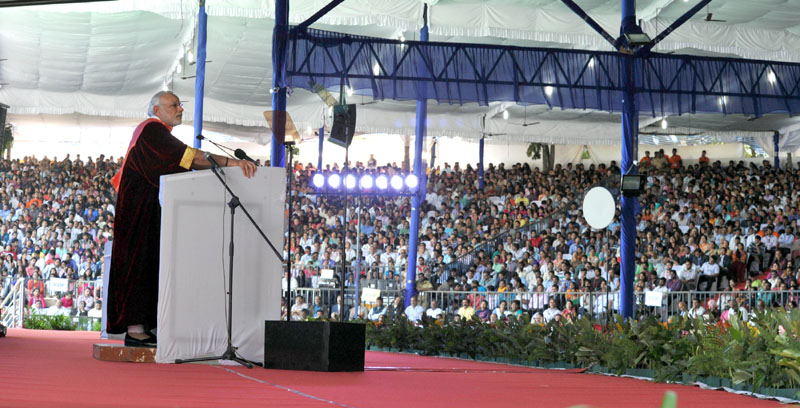 The Prime Minister, Mr. Narendra Modi delivering the inaugural address at the 103rd Session of Indian Science Congress, in Mysuru on January 03, 2016.

Three A’s: Available, Accessible And Affordable
Five E’s: Economy, Environment, Energy, Empathy And Equity
Prime Minister says that Government Intends to Integrate Science and Technology into choices that it makes and Strategies that it Pursues

Mysore (PIB-GR-TYP-BIN): Prime Minister Mr. Narendra Modi emphasized the need to bridge the gap between Science and indigenous growth aspirations. He was speaking to the august gathering of Nobel Laureates, Scientists and delegates across the world at the Inauguration of 103rd Indian Science Congress at the Mysore University on January 3. He stressed that innovation in approach is not just the obligation of the government, but also the responsibility of the private sector and the academia. It was the time of a new awakening in India which sought not just freedom, but also human advancement in India.

The Prime Minister drew the attention of the delegates towards the one of the biggest challenges for the world, and one that dominated global attention last year which is to define a path to a more prosperous future for our world and a more sustainable future for our planet. We were consistent in our message that it is not enough to speak of targets and restraints but it is essential to find solutions that help us easy transition to a future of clean energy said the Prime Minister. For this, he stressed on 3 As available, accessible and affordable for all.

Prime minister suggested for the network of 30-40 universities and labs focusing for next ten years on transforming the way we produce, distribute and consume energy which he said he will also pursue in G 20. This is especially critical for India to achieve target of adding 175 GW of renewable generation by 2022. He called to employ fossil fuel for more efficient use and tap newer sources of renewable energy like ocean waves to geo thermal. Mr. Modi said that that Government intends to integrate science and technology into choices that it makes and strategies that it pursues.

Calling the present century as ‘Urban Century’, as by the middle of this century two thirds of world’s population would live in the cities, he said that studies suggest that nearly 40 per cent of the global urban population lives in informal settlements, or slums, where they face a range of health and nutritional challenges. That is why I have placed so much emphasis on smart cities, the Prime Minister added.

He called upon the scientists to be concerned of what he called as Five E s at the centre of their enquiry and engineering: Economy, Environment, Energy, Empathy and Equity.

This year marks a hundred years of a significant moment in the history of science, when Albert Einstein published in 1916 “The Foundation of the General Theory of Relativity”. Today, we must recall the humanism that defined his thought: “Concern for man himself and his fate must always form the chief interest of all technical endeavors. “ He called upon everyone whether we are in public life, or we are private citizens, and whether we are in business or explore science to leave the planet in a better state for our future generations. Let the different disciplines of science, technology and engineering unite behind this common purpose.