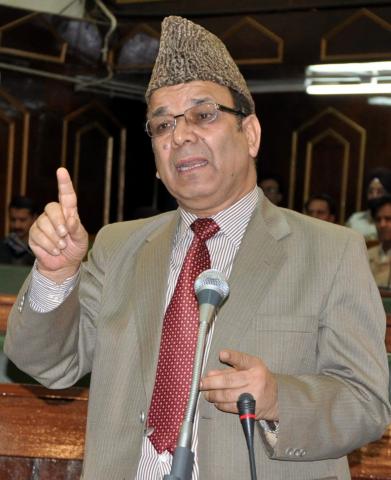 This was stated by the Minister for Finance and Ladakh Affairs,  Abdul Rahim Rather during debate on the Appropriation Bill in the Legislative Assembly today. He said the department Law has already a full-fledged research and codification wing which is examining the continuance of Laws and Statute books and their relevance in modern times”, adding that about 13 Laws were declared as obsolete by the Act of the State in 2010.

Rather said that the Government has initiated the process of inclusion of new services within the purview of the Jammu and Kashmir Public Services Guarantee Act 2011 adding that the Chief Minister,  Omar Abdullah has approved inclusion of three more important services viz issuance of copy of FIR to the applicant, Character Antecedents Report from CID in respect of newly appointed candidates in Government service and Verification Report from CID for acquiring passports. He said all the departments including Labour and Employment have been asked to identify services pertaining to their departments to be brought within the purview of the Act. “So far the State Government has notified forty five services pertaining to six departments to be delivered to the eligible persons in a fixed time limit under the Act”,  Rather added. He said with a view to ensuring strict implementation of the Public Services Guarantee Act, 2011, a ‘Public Services Management Cell’ has been constituted in the General Administration Department recently.

The Minister said that in order to look into demands for creation of new administrative units, the already constituted committee has already submitted its report  and is under examination of the Government adding that policy decision in this regard is required to be taken on total human resource requirement alongwith its financial implications, total infrastructural requirement and certain issues with regard to the Tehsils and Niabat circles created for the purpose of settlement operations and agrarian reforms which need to be examined in greater details viza-viz the recommendations of the Committee. He said that detailed exercise on these matters is being conducted and as soon as the said exercise is completed, it will be placed before the Cabinet for appropriate decision.

The Minister said that exemption from payment of entry tax under the J&K Entry Tax on Goods Act, 2000 on the scientific equipments, critical chemicals and reagents used by the research and development institutions of the Central and the State has been proposed by me in my budget speech for the year 2012-13. He said necessary orders having effect from 01.04.2012 are being issued.

Rather said that during the current fiscal so far about 108.23 crore have been released to Panchyati Raj Institutions (PRIs) for construction of 1080 Panchayat Ghars under 13th Finance Commission Award and further  63.40 crore have been authorized for community development and Panchayat works under the State Plan. “ In all, 1788 Panchayat Ghars are under construction presently under 13th Finance Commission, MGNREGA and BRGF grants”,   Rather said. He said issue regarding allotment of land for permanent settlement of Nomads (Gujjar & Bakarwals) is under active consideration of the Government. The concerned Deputy Commissioners have been asked to identify suitable land for development of colonies for nomads. He said Government has taken up many measures to protect pastures and Meadows of Nomads which include artificial closures wherein artificial patch sowing of pasture land, establishment of new nurseries for raising grass slip and fodder plants and creation of fodder Banks.

Rather said a proposal, to make items in cross LOC trade list more specific, has been sent by the Ministry of External Affairs, GoI to Government of Pakistan for elicit their response adding that at present 21 different items are traded from Salamabad to Chakoti and from Chakan-da-bagh to Rawlakote.

Rather gave detailed reply to various queries raised by  M.Y Tarigami, Ch. Zulafkar, Prof Chaman Lal Gupta,  Rafi Ahmed  Mir Saif-ullah, and  Harsh Dev Singh, after which all the members in the House unanimously passed the Appropriation Bill move by the Finance Minister.