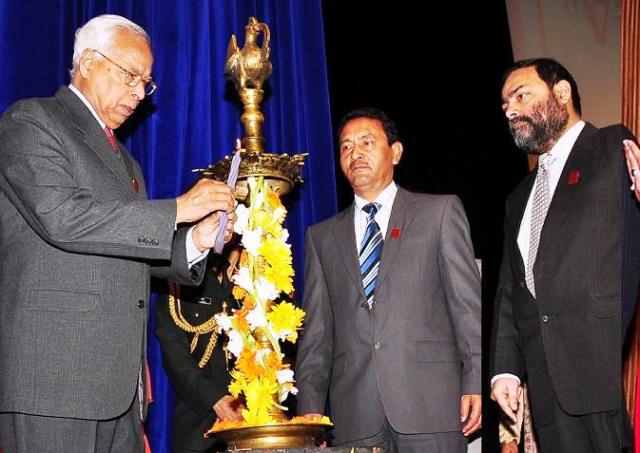 Jammu, February 24 (Scoop News) – The Governor,  N. N. Vohra, has emphasized the need for preservation and effective showcasing of the rich cultural heritage of Jammu and Kashmir for which it has been known since centuries past.

The Governor, as Chief Guest, was addressing the inaugural function of the 3-day Students’ Festival of Music, Dance and Drama, “Virasat-e-Riyasat”, at the General Zorawar Singh Auditorium, here today. Various Universities and other institutions of higher learning from the State are participating in this event which has been organized by the .

The Governor, who is the Chancellor of the University, observed that we should focus on reviving and strengthening our glorious pluralistic cultural traditions and heritage and work towards making a strong and a vibrant nation. He said that ours is a multi-religious, multi-lingual and multi-cultural country and this unique aspect has been the greatest strength of our country and the State. He said the three regions of the State are a treasure house of art, culture and heritage which needs to be optimally preserved and promoted.

Referring to the “Virasat-e-Riyasat”, the Governor said that this event has provided a very useful opportunity to the students from various parts of the State for coming together and showcasing the cultural heritage of various areas, adding that it would go a long way in further strengthening our cultural unity. He congratulated the Vice Chancellor of the for organizing this event and said that it could be built upon as a symbol of the representation of the glorious composite cultural heritage of the State. He observed that this event could rotate from one university to another, in the coming years.

Earlier, the Governor lit the ceremonial lamp to mark the commencement of the “Virasat-e-Riyasat” and released the Souvenir of the cultural festival.

The Minister for Tourism and Culture,  Nawang Rigzin Jora, who was the Guest of Honour, said that “Virasat-e-Riyasat” has provided an opportunity to celebrate the country’s and the State’s pluralistic ethos. He added that the students from across the State would get to see and also showcase the culture of the three regions of the State.

Jora, while lauding the University for organizing this event, hoped that the festival would emerge as a platform for celebration of our multi-culturalism, which highlights the values of compassion, love and kindness.

The Vice Chancellor, Jammu University, Prof. Varun Sahni, dwelling on the aims and objects of organizing “Virasat-e-Riyasat” said that it has been aimed at to highlight, celebrate and preserve the musical and dramatic heritage of the State, create a platform for the students to compete against, and also learn from one another, and to build new partnerships and collaborations between the institutions of higher learning in the State. He expressed his gratitude to the Governor for inaugurating this cultural festival.     The Dean, Students Welfare, Prof. N. K. Tripathi, spoke about the various programmes being presented during the 3-day cultural festival.

A captivating cultural bonanza showcasing the composite cultural heritage of the three regions of the State was presented on the occasion.